After Port Washington resident Adrienne Zausner was diagnosed with Frontotemporal Degeneration Dementia in 2010, fellow resident of 18 years Joan Harper decided to write a cookbook inspired by the 25 years the two had spent traveling Europe together and the many recipes they shared. The self-published Cooking with Adrienne: A Story of Friendship and Food explores the friendship between Harper and Zausner through recipes and years of travel.

“Frontotemporal Degeneration Dementia is a degenative disease and affects part of the brain involved with speech and writing organization,” explained Harper. “By 2014 Adrienne was barely able to speak intelligibly. It was at that point I realized I was never going to be able to call her up and ask her about our recipes. She wouldn’t be able to respond. I was in a panic and I decided to compile all of the recipes and I kind of sat down with her notebook and realized she had actually taught me how to cook.” 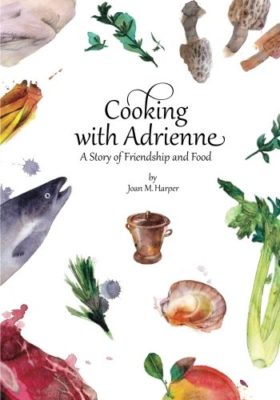 The cookbook was inspired by the many years Zausner and Harper had traveled Europe along with Zausner’s eagerness to learn how to cook new dishes. Each time the two visited a restaurant, Zausner would get the chef to come out and talk to her about how they cooked the dish she had eaten, sometimes even getting the recipe out of them. While in France, Zausner took cooking classes with Simone Beck, co-writer of Mastering the Art of French Cooking, to better understand the chefs she spoke to in restuarants and make the recipes they gave her at home.

“Adrienne started taking notes of everything,” said Harper. “I have the notebook with 50 years worth of eating in it. It’s this incredible timeline of eating and how food changed and what you ate changed. It is like the history of the restaurant.”

Zausner first became an original foodie in the early 1960s when nouvelle cuisine, a style of cooking with fresh ingredients, arose in France. She soon became friends with chefs who took up this nouvelle cuisine, observing how the cooking style changed with time as chefs began to get rid of excess sauce and preservatives and turn toward fresher ingredients and engaging the diner through the design of the plate.

“Nouvelle cuisine held the idea that chefs are feeding you, but it should be a feast for the eyes and the smells should conjure things up,” said Harper. “It was all senses, but what happened as it grew and expanded, particularly in the U.S., and the idea of nouvelle cuisine had been taken up by non-classically trained chefs. It didn’t grasp what the revolution was about and they used too much decoration, there were small portions and it was very expensive.”

Harper wrote Cooking with Adrienne with Zausner’s voice in mind, hoping that the cookbook would keep Zausner’s voice alive in the world because Zausner no longer could speak. The book takes conversations and recipes Harper and Zausner had together and puts them down on paper for others to enjoy. In honor of her friend, Harper donates 10 percent of the proceeds from each book to the Association for Frontotemporal Degeneration (AFTD).

“I don’t know if this is a drop in the bucket but if this can do something for finding a cure, I’m glad to do it,” said Harper. “It is the most debilitating thing for a woman who could speak three languages to not be able to speak anymore.”

Along with giving some of the proceeds from book sales to the AFTD, Harper will be running a Food For Thought Campaign through the association from Sept. 24 to Oct. 9. The Food For Thought campaign seeks to make more people aware of Frontal Temporal Degeneration Dementia while involving some food and a little education, and to raise funds to support AFTD’s mission. Participants can host any type of event as long as food is included or find restuarants that are participating in the event. Harper also urges participation simply by using social media to share a recipe using the hashtag #EndFTD. During the campaign 100 percent of the proceeds from the sale of Cooking with Adrienne will be donated to the AFTD.

“I will be hosting an event in England involving dinner and a little education to raise funds to support AFTD’s mission,” said Harper. “And I will be sharing recipes and information about AFTD every day of the campaign.”