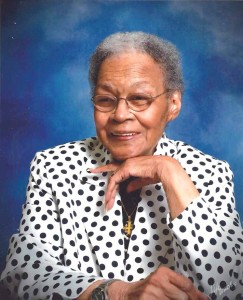 Born on a Friday, July 13, to Lillian and Rev. Richard Frier, Sr. in Harlem, Lillian felt that her mother was grooming her to be a minister’s wife instead of an ordained minister and pastor.

Ever guarded about her age until she reached 90, Rev. Webb would reply with answers like, “I am older than my teeth, and younger than my gums.” Considered a gifted child educationally, she was skipped twice in school and was accepted to attend the elite Hunter High School and Hunter College.

After graduating in 1949, from Hunter as a biochemistry major, Frier-Webb became disenchanted with her work in the medical field. Her brother Richard Frier Jr., who was more interested in hanging with musicians like Thelonious Monk, Walter Bishop, Jr., Miles Davis and Bud Powell at the family’s 135th St. apartment, rejected the idea of becoming a minister like his father, leaving the family trade at Lillian’s feet. Actress Cicely Tyson, a contemporary, also lived in Lillian’s apartment building and actress Ruby Dee was a schoolmate.

Lillian and her classmates after graduating was a new breed of independent woman, who were precursors of the feminist movement. Many women of her generation did what she did after college, stating in a news article, “I decided to legitimize sex, so I got married.” United in marriage to Robert Stanley Webb in 1951, together they raised three girls, Leslie Frier (her adopted niece), Rev. Jo-an L. Owings, and Cay Fatima, who Lillian labeled her “silk,” “cotton” and “denim” girls, worked hard toward the American dream of post-World War II suburban life.

Saving long and hard, in 1959 the Webb family bought their first home and moved from Queensboro Projects to Lakeview where Tante lived until her death. In 1962, the family structure took a hit when Lil and Bobby decided to separate, leaving the single mother struggling financially. Life went on and 432 Scaneateles Ave. became a haven for many in the neighborhood for Lillian’s healing touch, as well as a creative center for her children and their friends.

Described by Newsday as, “the predecessor and precedent—role model for multitudes of new women clergy, married and single, who are juggling responsibilities of mothers of children and leaders of congregations,” Lillian struggled with the dichotomy (her favorite word) of the call to ministry vs. the call to marriage and motherhood. Searching, with the mentorship of her father’s nephew Rev. William Lee Freeman, the then pastor of the church her father was founder, Harlem’s Mt. Zion A.M.E. Church, Webb set her sights on theology the first year her denomination [1960] allowed for the ordination of female itinerant elders. The butterfly that emerged from the male-dominated cocoon of Christian ministry, eventually received a master’s in religious education at New York University, an additional master’s in social work from Adelphi University and a certificate in pastoral studies from the Blanton-Peale Institute.

Upon admission to the annual conference, Lillian took a position as a secretary with the National Council of Churches under the leadership of her friend and boss Associate Director of Stewardship and Benevolence, Rev. Malcolm Blackburn. “The mid-60s were replete with change for the underprivileged, said Webb. “I joined up with Martin Luther King movement, the inter-faith-inter-racial movement, the poor people’s movement. Whenever and where there was a pray-in, sit-in, stand-in, I was in—if not in person, in rebellious spirit. I knew how to fight a cause—other people’s causes. Isn’t that what a minister is supposed to do?”

Meeting Dr. Martin Luther King Jr. was an accidental acquaintance when the future Nobel laureate attended a minister friend of Lillian’s funeral. As she stated in the Daily News, “I was always being fresh, so as he walked past me I said, ‘It’s good to be a king’, Webb said, “He turned to me and said, ‘You want to come?’ So I ended up sitting next to him the whole service.”

There soon came a choice of whether to feed her family or feed a flock. Although she worked as minister of Christian Education at Bridgestreet A.M.E Church, a social worker at Nassau County Children’s Shelter, more education and better employment was a must. A forerunner of unique theological style, fused with special progressive mental health and pastoral counseling techniques, Rev. Webb developed and taught courses at Adelphi University School of Social Work, as well as her significantly attended Principals of Counseling I, II, III courses for Nassau County Department of Drugs and Alcohol.

In 1975, Lillian opened a private practice called Therapy et. al., with the understanding that individuals profoundly needed the integration of a complex concept; involving the mind, body and spiritual healing arts. It was through her practice that the opportunity arose to expound on her writing skills. “One feels it necessary to comment on our grasp of the Bible by way of the human circumstance. One who preaches must come to know the doubts and hopes, longings and fears, the strengths and weaknesses of the human heart. He arrives at at the awareness first, I think by seeking; not morbidly to plumb the depths of his own being.”

A brilliant wordsmith, with skills as a certified sex therapist, Lillian wrote for 10 years Essence magazine’s popular advice column, “Your Sexual Health.” The national and international spotlight of being ansex advice columnist, brought her to the attention of many talk show programs including Oprah Winfrey. “The family was very excited about this news,” remembers daughter Cay Fatima, “which meant the doors of further opportunity could be blown open, but because the shows at that time were more about sensationalism then and my mother did not like the exploitive quality of the segment they were producing. Who turns down Oprah? Even though most that appeared on Oprah’s show profited immensely, my mother exhibited a sense of integrity that I have come to love and respect. Oprah eventually changed her format to more inspiring programing than sensationalizing.” In addition to her column and Sunday sermons Lil had a sermon published in volume three of the book Those Preaching Women, edited by Ella Pearson Mitchell.

From 1988 to 1996 Lillian chaired African Methodist Episcopal Women In Ministry known as AME/WIM. The group was formed to demand full equal rights to women in the AME Church and “unseat the old boys club.” The group became an official commission of the General Conference in 1990. This effort led to the election in 2000 of Rev. Dr. Vashti McKenzie, who was consecrated the first female Bishop of the A.M.E. Church.

Lillian held many professional positions, both in and out of the organized Church. Bethel AME Church in Freeport served as her stepping stone when in 1985, on St. Valentine’s Day Rev. Webb became the pastor of Mt. Olive AME Church in Port Washington where she served for 17 years. In the early 1980s Lillian formed the Reach Out and Touch Team consisting of her daughter Jo-an and close friend Rev. Dr. Rogina Williams. Under Bishop Frank Curtis Cummings, Lillian served as Secretary for the First Episcopal District of the AME Church.

Combining her gifts in counseling and her calling as an ordained clergyperson, Lillian served as chaplain at the Nassau County Jail, for more than two decades, providing pastoral care for the female inmates. Rev. Webb began a unique worship service, which she named, “The Church Inside.” Each Sunday the women would have worship service complete with a choir, ushers and Rev. Webb as their pastor. This congregation consisting of 80-100 incarcerated women, benefited from Lillian’s spiritual messages of hope, faith and forgiveness, giving the opportunity for many to change their lives through her ministry. Profoundly dedicated to prison ministry, Lillian also founded Women at the Well to help women upon release from jail and became an advisory board member of Safe Harbor Mentoring Program.

In 2003, Lillian retired from the pastorate, but remained active in ministry returning to Bethel AME Church Freeport where she founded the Bethel Bible Institute and R.I.P (Retired Itinerant Preachers). Under the leadership of her daughter, who is carrying on the ancestral spiritual heritage, Pastor Jo-an L. Owings, Lillian coordinated the greeters, consulted with the Department of Christian Education, edited the Mt. Zion Newsletter, assisted in the pulpit and founded the Twelve Stones Ministry which preserves the history of Mount Zion.

In a news article, Rev. Owings laments, “Certainly my mother is special, she’s not just a mother in the authoritarian sense, she’s a pal a friend. When I was growing up she often struggled with the fact that she didn’t fit the role of the traditional mother who cooked and cleaned. Her creative mind continues to be an inspiration to her children, Leslie, Kathryn and myself.”

The accomplishments and awards that Lillian received throughout her life are too numerous to mention. A list of accolades and achievements could never sum up the life of Rev. Lillian Frier Webb. She has mentored and facilitated personal growth and healing for hundreds, and by extension thousands, of women and men.

Many of them have gone on to become prominent theologians, pastors, social activists, writers, and contributors to multiple professions. She believed in the potential of everyone to become what God created them to be. Lillian helped them to do their best and to live free from shame and judgment. Always making it clear that the work to reach that achievement plateau; the journey was fraught with painful self-analysis, brutal honesty with self, and a willingness to “hang in there” to reach your destination during the rough times.

Rev. Webb’s favorite metaphor is the metamorphosis of the caterpillar and the butterfly. One transforms from an ugly caterpillar to become a beautiful butterfly through the transformative power of the God’s grace giving hope for the flowers (God’s people).