Phyllis Ann Yohe passed away quietly on Feb. 23, in Port Washington at the age of 68.

She was born in Mineola on Aug. 11, the daughter of Robert E. and Mary A. Yohe, most recently of Port Washington.

Phyllis is survived by her brother Robert.

While growing up she moved several times, as her father was being transferred while employed by the American Bureau of Shipping. Major residences included Newport News, VA; Antwerp, Belgium; West New York, NJ; and finally Port Washington.

Her schooling began while the family was living in Antwerp, with the rest of her formative years in Newport News. She graduated from Newport News High School in 1963. The family moved to Port Washington soon after her graduation.

She was secretary to the chairman of the Department of Education at C.W. Post College for several years. Later, she moved to New Jersey where she worked as a secretary for several attorney offices in New York City.

Her hobbies included sewing, upholstering, painting, and landscaping. Her final years were spent taking care of her mother, Mary, in Port Washington.

Her ashes will be buried at Nassau Knolls Cemetery in Port Washington. In lieu of flowers, memorial donations may be made to Good Shepherd Hospice, 245 Old Country Rd., Melville, NY, 11747. 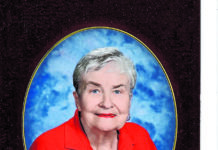