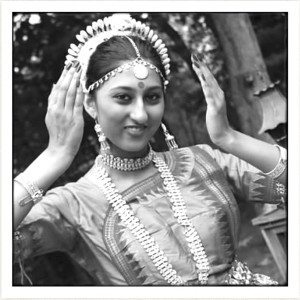 Naome Sajnani, an 11th-grade student at Schreiber High School, performed Odissi, an Indian classical dance at her Manch Pravesh, her graduating performance and culmination of her studies at Malais School of Odissi. The performance showcased more than 10 years of hard work and perseverence. It was held at the Jeanne Rimsky Theater in Port Washington on Sunday, Aug. 30.

Odissi originated in the temples of eastern India in the second century B.C. and has gradually gained popularity all over the world. Sajnani got her training in Odissi from Guru Mala Desai. Balancing her academics and extracurricular activities, Sajnani regularly attended weekly dance classes. She also spent hours practicing several Mudras, a delicate combination of facial, hand and body postures expressing the emotions conveyed in the lyrics. These Mudras are intricately woven into dance movements matching the rhythm of the song.

As the curtain went up, Sajnani entered the stage with poise and confidence. Her dance started off with prayers and then incorporated meaningful pieces from ancient Indian poetry and scriptures. Her performance to eight songs lasted for more than an hour and a half and was replete with splendid, clear movements and fantastic energy. The final number was especially thrilling, as the song tempo had increased and Sajnani demonstrated the same grace and skill. The audience of over 200 people of all ages enjoyed the performance.

After her performance, Sajnani shared the experience of her journey of learning Odissi. She expressed her sincere gratitude to her parents, her brother, Jai, her sister, Taara, and especially her teacher, Guru Mala Desai. Desai, who was equally thrilled, said that Sajnani had the required dedication and that her performance demonstrated the mastery of the skills needed by a graduating dancer. Desai, the artistic director at Mala’s School of Odissi on Long Island and in New York City, has been tirelessly perpetuating, promoting and teaching this classical dance form for the past 15 years in the U.S. The afternoon culminated with Sajnani’s friends and family showering her with flowers, blessings and best wishes for her future.