For his entire life, Walt was an avid sportsman and fanatical sports enthusiast. While attending Paul D. Schreiber High School, he played varsity football all four years and varsity basketball for two years. As a senior, he was awarded All Nassau County Player for football. His athletics lead him to pursue football and academics at The Oswego University. After two years, Walt decided to serve his country.

Walt was a ranking member of the U.S. Army and served his country during the Korean Conflict. A Port Washington Police Department Lieutenant, he retired after 25 years of service. Walt was active in many local charitable organizations. He served as a delegate from New York on the 1992 Presidential Trust. Walt enjoyed a lifetime of boating, skiing, hunting, fishing and recreation in the Adirondack Mountains with extended family. 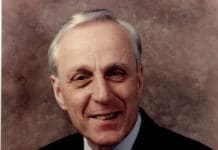