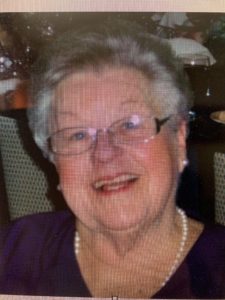 Her sainted husband of 61 years, Andrew Ryerson Mosby (d. 2018), called her “Veronica, my angel.” Most everyone else called her “Ronnie.”

Ronnie was born in Amityville, NY to Veronica & Carl M. Davis.  She is one of 6 daughters; Grace, Ruth, Joan, Evelyn and Carol pre-deceased her.  On February 21, 1938, she was baptized into the Christian faith at the Church of Saint Joseph in Babylon.  Her childhood years were spent in Floral Park, where she graduated from Sewanhaka High School in 1956.  Studying dance since early childhood, Ronnie, with her beautiful legs, was a classic “Old Gold” cigarette dancer in the 1950’s.

On Oct. 26, 1957, she married Andrew at the Lutheran Church of Our Savior in Port Washington.  The Reverend Mr. Henry J. von Schlichten officiated. The newlyweds enjoyed a dude ranch honeymoon and then settled in Andrew’s hometown of Port. In her new hometown Ronnie was employed by several local businesses and organizations, including Saint Stephen’s Episcopal Church as secretary to the Rector. She stepped away from St. Stephen’s office in subsequent years to be a stay-at-home mom to her three children, Wendy, Andrew Eugene, and Jill. She is famously remembered for asking little Andy as he went off to school every day if he had a clean handkerchief. A helicopter mom before the term was invented!

When their children were in school full-time, Pastor von Schlichten asked Ronnie to become the secretary at the Lutheran Church on Franklin Avenue, a position she faithfully carried out for 42 years.  In addition to her professionalism as secretary, she’s fondly and widely remembered by the congregation for being their uncertified social worker, supplying TLC, a helping hand, and an abundance of food, especially her famous chicken soup.  Several years ago, she was runner-up in Fairway market’s chicken soup contest.  In 2013, the congregation installed a new kitchen named in her honor for all of her service to the church family.  As her own children became adults, she reveled in being “Aunt Ronnie” to many children for whom she acted as caregiver – her Goddaughter, Erin; Dana; Chad; Bryan; Lisa; Christina; Tommy; Ellen; Scott and Grace – taking all of them on outings to feed the ducks at Mill Pond.

Pre-deceased by her husband, “Big Andy,” and a grandson, Luke Buss, she is survived by her much loved children, Wendy (Warren) Trunz of Port Washington; Andrew E. of Port; and, Jill Buss of Manchester, VT; five grandchildren Warren (Kathy) & Grace Trunz; Grant & Noelle Mosby; and, James Buss.  She is also survived by many nieces, nephews, neighbors, friends, members of the Port Washington Senior Citizens Center, and by deeply saddened members of the church to which she belonged for 63 years. Her family and church family are comforted by Easter’s promise of the Resurrection.

Because of the COVID-19 limitations, there will be private funeral and burial services led by Pr. Charley Vogeley with whom Ronnie worked for 38 years. A Memorial Service will be held in the future. In lieu of flowers, the family invites memorial donations to the Lutheran Church of Our Savior, 12 Franklin Avenue, Port Washington, NY 11050-3611.