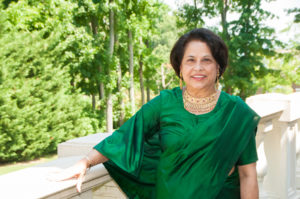 Ved was born in Nurpur, India, in the present-day Himachal Pradesh. Before the partition of India, her father served as counsel to the Maharajah of Sheikhupura, a kingdom adjoining Lahore in undivided India. As she liked to say, her family was at least two generations ahead of her time: They believed in education, advancement, and work for women.

Following the intense disruption of partition, Ved lived in Dharamsala, the headquarters of District Kangra, in the foothills of the Himalayas — with the Dhauladhar range in sight from her window. That view was her most cherished vista, until she and her husband, Dr. Mahendra P. Kawatra, built their house and garden in Sands Point, with a view of the Long Island Sound.

As a student, she was energized by John F. Kennedy’s bid for the presidency and kissed her rupees before mailing them to his campaign. After his election, she dreamt about coming to America to be part of Camelot, and to learn directly from the sociologists whose work she was studying. More than anything, she wanted to experience the democracy and the possibility of the United States.

Mahendra’s Fulbright took them first to Cambridge, Massachusetts, then to Urbana, Illinois, and finally to New York City in 1964. Ved continued her studies throughout. In 1971, the Drs. Kawatra moved to Port Washington, which remained their home for decades. Ved was a professor at the City University of New York until 1978, when she and Mahendra co-founded a family real estate management business, which she continued to run until 2016.

Ved raised her beloved family on Long Island and built a tremendous circle of friends, including her longtime Hawan group, her Gita group, her garden club, and her neighbors. She was also an avid and accomplished bridge player and enjoyed traveling the world.

Ved valued education, had an unparalleled work ethic, and was a strong feminist. With her brilliant intellect and sharp wit, she shared spirited discussions with friends and family on all topics — real estate, politics, literature, women’s rights, and, of course, the best time for young people to marry.

Most of all, Ved loved being with her family in her cherished home and garden. She is survived by her sister, her three daughters, her three sons-in-law, and her seven grandchildren. In her final weeks, she reveled in the company of her children and grandchildren.