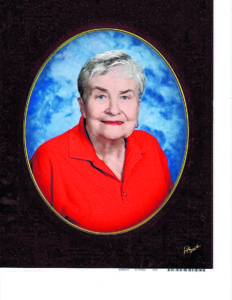 Rita Ann Knizewski passed away peacefully, Saturday, April 3 at Carriage Hill Assisted Living, Madbury, NH. Rita Ann lived at Carriage Hill for the past three and a half, where she was known for her positive attitude, infectious smile, deep faith and quick wit. For a few short years, Rita brought a small piece of the Bronx to Madbury. Her loss is deeply felt by all.

Rita was born to Hannah and Patrick Maguire in 1934, the oldest of five children. She grew up in the Irish neighborhood of Inwood in Northern Manhattan. She loved her Irish heritage and developed her Catholic faith during the depression and war years. Summers were spent with cousins who lived on a farm on the grounds of a Convent in Chappaqua, NY.

Rita attended Cathedral High School in Manhattan and after graduation, continued to work in Manhattan as a clerk for American Airlines. She loved the city and all it had to offer: theatre, ballet, restaurants and the hustle and bustle of the people.

In 1955, Rita married Edward T. Knizewski. The couple started a family in the Bronx before moving out to Long Island where they built a house in Port Washington, alongside of their close friends from the Bronx. Rita eventually had five children, her pride and joy. Her life in Port Washington revolved around her family, her many friends and the community. Active in Our Lady of Fatima Church, the local PTA, sports, Boy and Girls Scouting, Rita strongly encouraged her children to participate in multiple activities to which she shuttled back and forth tirelessly. After her children were grown, Rita worked as a home health aide, providing in home care for many local residents in Port Washington before retiring to Riverdale, NY where she resided before moving to NH.

Rita derived great comfort and strength from her Catholic faith, which was central to her life. A proud Irish woman, she retained her sense of humor and sharp wit to the end. Rita will be remembered as a friend to many, always willing to lend a hand and help others, whether offering rides, delivering groceries, caring for children or just offering prayers for anyone in need.

Rita is survived by her sister Regina, her five children: Joseph, Edward, Marianne, Julianne and Ritamarie, their spouses and 10 grandchildren. May God Bless her and hold her in the palm of his hand.