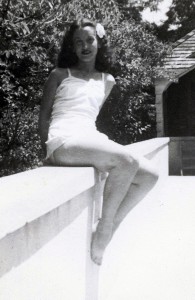 Joyce was born in Battersea, London, to Dorothy Ida Charstone of Cornwall, Falmouth and London, UK, and Pierre Henri Dendievel, Ph.D of Roubaix, and Paris, France. Joyce first arrived in the US on June 2, 1931, aboard the French Line’s luxury steamship, SS Normandie with her family, after her father, Pierre Henri Dendievel, Ph.D, a VP at Le Compagnie General Transatlantique Ltd’s French Line was re-assigned to the NY office. Summers were spent cruising back to England, to Cornwall, Falmouth and the French countryside, until WWII — when it was no longer possible to travel safely across the Atlantic via ship after being chased by a Nazi U-boat. That last trip back on SS Normandie, they made a zig-zag course to avoid being blown up, as many were also used for bomb transport and became easy targets. Joyce lost many relatives during the air raids in London.

Mrs. Sparozic was involved with helping her parents with the Free French War effort with her father, also a French/US Intelligence Agent and Bundles For Britain with her mother which often took them to Hearst Castle in Sands Point in the 1930s.

She attended Port Washington Schools and was a 1940 Graduate of Port Washington Senior High School – she was a member of the Daubers Art Club, PWHS Choir, enjoyed French, archery, badminton and bridge. She received an award from the soccer team. Her brother-in-law, William T. Allen, was a former teacher and principal there, as well, prior to marrying her late sister, Doreen.

Despite her petite stature and quiet demeanor, Joyce bubbled over with enthusiasm, independence and artistic license. After attending Mayer School of Fashion Design in New York City and receiving a degree in fashion design, she headed to Macy’s Herald Square for employment, then McCalls/Butterick Pattern Company before she became head designer for children’s dresses at Joseph P. Love, which sold to the Best & Co., Bergdorf Goodman, Saks, etc.

She was married to Jean Sparozic, a French Merchant Marine in 1946, whom she met during WWII, at a dance canteen in NYC for French sailors she’d go to after work, as she was fluent in French. She was well taken in by his Johnny Depp good looks, no doubt. After a joint venture, Joyce was instrumental in helping Jean create his own fashion career and a 7th Ave. custom evening gown manufacturer, Amourese Couture.

Joyce continued her interest with art, design, and sewing, after the births of her three daughters – Jill, Suzy and Wendy. Joyce also spent many later years working at her sister, Margaret Baers’ The Red Door Antique shop on lower Main St. in Port Washington, in sales and as window dresser until mid 2000s. At one point, for fun she worked at the Beacon Movie Theatre in the 80s.

In a front row seat at Port Washington Public Library, she immensely enjoyed attending rock concerts by her future son-in-law, multi-platinum musician and songwriter, John Ford of British band, the Strawbs and Ian Lloyd’s Stories. Dedicated in her memory, John Ford has just completed an instrumental song, “Rejoyce Joyce.” She was also an avid fan of the Beatles – her favorite song “Let It Be,” still had classical music, opera via WQXR always in the background at her home, Brit-coms on PBS Channel 13 WNET and Channel 21 WLIW, and cooking for her family, especially at holidays. She still loved composing music, especially melodies and playing piano – her favorite being “Ah! Sweet Mystery of Life,” by Victor Herbert (always quite proud of the fact she could read music), along with collecting antiques, painting and sketching.

Joyce was a strong woman – with her warm smile, she was always ready to help someone in need, or lend an ear. Her favorite motto was “Onward and Upward,” always looking at the bright side, her cup being half full rather than half empty and make the best of everything.

Joyce Dorothy Dendievel Sparozic was dearly loved by all who knew her and a well-known figure in Port Washington by many. Joyce is pre-deceased by her parents Dorothy and Pierre Dendievel, Ida Delaura (William “Red”), Doreen Allen (William T.), Ronald P. Dendievel (Jane Thomas).

Joyce Dorothy Dendievel Sparozic was my mother – I would never trade her for another. I had the good fortune to care for her extensively this past year at her home while she dealt with COPD from second hand smoke, and now, the one and only time my own heart has ever been so broken. She was truly a remarkable woman who I learned so much from and owe everything to. When recently asked what she most likened herself to, her answer was quick and simple — a butterfly. Why? Because she said they were so delicate and free spirited, as she felt she was. Now, this little butterfly is set free. R.I.P. forever Mommy. –Jill Morrison