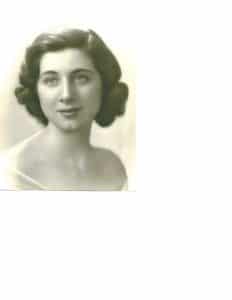 Described by family and friends as “a woman ahead of her time,” Anne was born on April 16, 1928, in Manhattan. Anne primarily grew up in the New York area. She spent her childhood in Valley Stream, before moving to Brooklyn during her teenage years, where she worked in her grandfather’s Italian restaurant. Anne graduated early from Girls’ Commercial High School in Prospect Heights, Brooklyn. An impressive student, Anne was offered a full scholarship to a four-year college but was unable to attend due to family obligations.

Anne moved to Port Washington in 1961, where she proudly worked in various roles, including a career at Latham Lumbers, while raising her family. Anne enjoyed taking her children to Bar Beach Park, Manorhaven Pool, Christopher Morley Park and Jones Beach, always packing pepper and egg sandwiches as a treat. Anne supported her children in all of their activities–from her sons’ little league, middle, and high school sporting events to Schreiber Sports Night and Portettes. Growing up in an Italian family, Anne remained a skillful and creative cook throughout her life. Each Sunday, the kitchen smelled of fresh sauce and the “macs” (macaroni) were served as family gathered to dine together.

Anne was a presence to all who knew her; she loved watching “Wheel” every night at 7:30, listening to music (especially Frank Sinatra and Jim Croce), reading mysteries, experimenting in her vegetable garden, as well as knitting.

Anne’s life was made complete by her two granddaughters, who lovingly referred to her as “Lala.” Lala expertly taught them how to cook, knit, and garden. Anne’s sense of humor, determination, and persevering nature will be missed by all of those who had the pleasure of knowing and loving her. Private services were held on May 5. In lieu of flowers, donations can be made online to the St. Francis of Assisi Breadline.

Spectrum Designs And Nicholas Center Celebrate A Decade Of Autism...