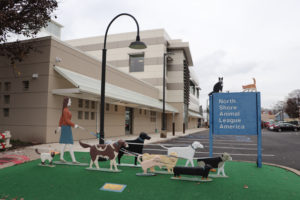 North Shore Animal League America (NSALA), located in Port Washington, recently opened up Bianca’s Furry Friends (BFF) Feline Adoption Center. The 14,000-square foot area was built as a second floor addition to the organizations original structure. The second floor frees up more space and gives the shelter the opportunity to take in more than 200 cats at one time. The new addition allows more room for both cats and dogs, with each having their own floor.

Bianca’s Furry Friends Feline Adoption Center was named in memory of Beth and Howard Stern’s beloved English bulldog, Bianca, who passed away in 2012. After Bianca’s death, Beth Stern and Joanne Yohannan, NSALA’s senior vice president of operations, began discussing the issues surrounding feline homelessness and what they could do to address the problem. They came up with the idea of building an adoption center devoted to the rescue, socialization, care and adoption of cats and kittens. In memory of Bianca, the Sterns agreed to spearhead fundraising for BFF. In November 2013, during NSALA’s annual gala, the Sterns announced a capital campaign to begin raising funds for the project. The campaign raised nearly $12 million and took six years for everything to come together.

The new facility features cage-free roaming areas, a food prep room, a grooming room, three adoption counseling areas, a family room, as well as offices and storage areas. Each of the cage-free rooms feature high perches for the cats to climb and explore, large windows, which bring in natural sunlight, sleeping spaces, quiet nooks for the cats to relax, as well as large viewing windows for visitors to watch the cats play, nap and interact. The idea behind creating a cage-free space is to help the cats to feel more calm and confident, leading to shorter stays and positive matchmaking experiences for felines and adopters.

There are four rooms, which are named after sponsors of the campaign: the Billy Joel room, the Rachael Ray room, Hallmark Channel’s Adoption Ever After room and the Julia Belle Mason room. Each of the four rooms displays a theme. The Billy Joel room’s theme is the New York State of Mind and features a piano which plays some of Joel’s top hits. The Rachael Ray room has a jungle theme with a large tree in the center, which acts as a scratching post and climbing area for the cats. The Hallmark Adoption Ever After room is in partnership with the Hallmark Channel’s Adoption Ever After Pet initiative. It features special shelving throughout for the cats to climb on and will serve as a kitten and cat bowl training camp, which takes place during Super Bowl Sunday. NSALA supports the Kitten and Cat Bowl to help educate the public about the many rewards of pet adoption, in hopes of inspiring people to open their homes and hearts to shelter pets. The last room is dedicated in the memory of Julia Belle Mason, a young girl who had cancer. Mason lived in Mississippi, but was given the opportunity to visit the adoption center and take home a kitten as part of the Make-A-Wish Foundation. Her spirit really connected with the staff at NSALA, and they decided to dedicate a room in her memory. Notable donors included Northwell Health lifetime trustee Sandra Atlas Bass of Great Neck, Hallmark Channel’s Adoption Ever After, The Rachael Ray Foundation, the Sterns and Billy Joel. 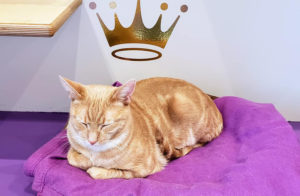 “Every person that donated to this campaign has made this become a reality,” Yohannan said. “There were many, many other donors who deserve to be acknowledged and recognized because without them this wouldn’t have happened.”

The league is currently preparing for their next major event, the Cat and Kitten Bowl, which will take place on Feb. 1 and 2. The Kitten Bowl parties and adoption events are hosted at hundreds of shelters across the country and help to provide permanent homes for the animals in their care. In May, the league will be hosting the Global Adopt-A-Thon. The center will unite with approximately 2,000 shelters across the country to stay open for more than 36 hours and will offer pet adoptions.

Other additions to the facility include a new interactive puppy playground, new runs for the puppy room and new kennel enclosures to help create a more home-like environment for the older dogs. Further upgrades and improvements to the canine adoption floor will continue throughout 2020.

NSALA is the world’s largest no-kill rescue and adoption center and has saved more than 1 million animals’ lives. NSALA is located at 9 Davis Ave. in Port Washington and is open Thursdays through Sundays from 12 to 8 p.m. for visitors and potential adopters.

For more information on BFF, the work of NSALA or how to support the no-kill mission, visit www.animalleague.org.