Nino’s Restaurant Group announced the opening of its newest concept, Nino’s Beach, on the North Shore of Long Island in Port Washington. Slated as one of the largest restaurant openings on Long Island this year, the restaurant sits right on the shores of Safe Harbor Marina and features refined, upscale Mediterranean cuisine using locally sourced ingredients. The seafood-centric menu is accompanied by an extensive craft cocktail menu and a large sparkling wine and champagne menu.
Conceived to evoke the feeling of a laid-back and luxurious vacation setting, interior designer Anna Niedermeyer worked with the Nino’s team to design a space that allows patrons to feel transported while highlighting the waterfront views on all sides. Stone, brass, Venetian plaster, and specialty wallcoverings are used to create texture within the interior of the restaurant. The space occupies roughly 9,500 square feet and includes room for 200 diners, including al fresco dining with an amazing waterfront experience.
The menu at Nino’s Beach was developed by Executive Chef and co-owner, Franco Vendome and Chef De Cuisine, Ken Corrow, who has worked alongside culinary greats like Gordon Ramsey, Marcus Glocker, and Stuart Rolston, and features modern Mediterranean cuisine, with a strong background in Southern Italian fare. 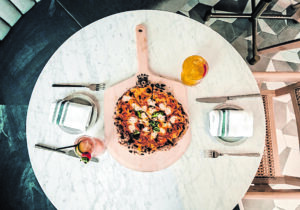 Menu highlights include an extensive oyster and raw bar, featuring locally sourced oysters, fresh seafood and sushi. A massive wood-fire pizza oven serves up a variety of fresh-to-order Neapolitan pies to share. Guests can also choose from a variety of house-made pasta and a selection of steaks including the 40 oz Porterhouse that round out Nino’s dinner offerings.
Brothers Michael and Franco Vendome are second-generation restaurateurs and have been operating and owning restaurants since working at their family’s first Nino’s restaurant, midtown Manhattan staple, Nino’s 46. They went on to open their well-known Astoria restaurant, Nino’s AQ in 2018 and are excited about the continuing growth of Nino’s Restaurant Group.
“As we see the reshaping of life post-pandemic, we are excited to have the opportunity to take a step forward with this new, unique concept, and build upon the Nino’s brand, continuing the celebration of the return of restaurants in New York,” said co-owner, Michael Vendome. “The opportunity to operate in a waterfront marina is rare in New York, and we are thrilled to help bring Long Islanders back to restaurants.”

Accompanying the menu, Nino’s Beach also offers a full-scale bar program, run by Michael Vendome in collaboration with bartender and beverage consultant, Damiano Coren, that will include a seasonal craft cocktail menu, wine offerings, and an impressive champagne bar featuring a large variety of champagnes and sparkling wines. Some of the cocktails guests can anticipate seeing include classic cocktails like the Old Fashioned and Summer Negroni, while also enjoying new favorites like the Spicy Passion Fruit Margarita, Watermelon Martini and Cucumber South Side.
“Nino’s Beach is a celebration of local and Mediterranean flavors paired with our unmatched view of the Sound,” said executive chef and co-owner Franco Vendome. “With the warmer months just around the corner, we are thrilled to begin welcoming guests from both the neighborhood and afar.”
Nino’s Beach is located at 43 Orchard Beach Blvd. and will open for dinner during the week from 5:00- 11:00 p.m. and will be open from 5:00 p.m.-12:00 a.m. on weekends. Nino’s Beach plans to expand its hours into lunch and brunch in the coming months.
For more information and to make a reservation, visit www.ninosbeach.com or call 516-502-0441.
—Submitted by Nino’s Beach