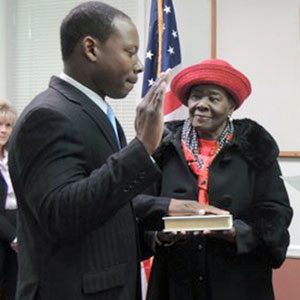 The oath of office was administered by Police Commissioner James Duncan.

Griffith starts his career as a patrolman in Port Washington with many years of law enforcement experience under his belt. He was a safety officer with the New York City Department of Mental Health, followed by years with the New York City Police Department. He served as the head of community affairs for the 100th Precinct in Rockaway. He then moved on to the 109 Precinct in Flushing Queens and was a member of the NYPD School Safety Task Force.

In November, Charles Kouvel, also a veteranof the NYPD, was hired by the department.

The two appointments bring the number ofpolice officers in the District to 59. A full complement would be 64 officers. Commissioner Duncan said the department will be adding five additional officers during 2014. The expense has already been budgeted.

The Port Washington Police District will certainly provide different challenges than the NYPD for the officers. But Griffith’s experience with mental health matters and school safety will bring a valuable skill set to a department that is heavily focused on community outreach and educational programs for students.

Duncan was quick to point out that new officers are joining the department at a lower pay scale and are making a larger contribution to the state retirement system, lowering the contribution required from the District on their behalf. This results in savings to the district, he said.

Appointments to the PWPD are made from the Nassau County Civil Service list. Candidates are interviewed by the department before appointments are made.