The Mill Pond Model Yacht Club is gearing up for another sailing season. The club races Class A model boats on the pond and bay beginning in the spring through the fall, weather permitting. They have about 40 Class A model boats that anyone who has driven by Mill Pond in the warm weather has seen sailing. The club holds races every weekend.

The club has about 25 members. Most members are local, but members also come from Manhattan and New Jersey.

The club has a long history in Port Washington. It was formed in 1898, according to club Commodore Perry Lengton. “One of the Dodge’s started the club,” said Lengton. “Charles Dodge, Fred Farmer, Harold McKee and John Erikson raced their homemade wooden model boats on Mill Pond. The present clubhouse was originally a small waterfront shop and after the 1938 hurricane it was moved to Smull Place and later to its current location at the head of Mill Pond.”

The boats are housed in the club boathouse at the east end of Mill Pond. The structure is in disrepair and Lengton is working with the Town to keep the current structure or erect a new structure in its place. 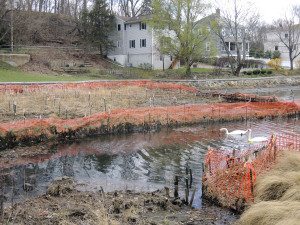 Town Councilwoman Dina De Giorgio has been instrumental in helping the club.

“The Mill Pond Model Yacht Club is a piece of Port history and I’m working with the club to help them to find a way to replicate the original clubhouse,” said De Giorgio.

An ongoing problem for the club is the weed growth that is prolific in Mill Pond. “The weeds thrive because of the runoff from all over Port,” said Lengton. “The runoff flows into Mill Pond and Baxter Pond. The runoff contains chemical fertilizers that people use on their lawns. The bottom of the pond becomes a cesspool. But there are certain bacteria that can fight the pollution and the Town of North Hempstead has planted grasses to try to alleviate the problem.”

Part of the problem is the depth of the pond.

“The pond used to be deeper, more than four feet. Now it is less than three feet,” said Lengton. “When the sun hits the bottom of the pond, there is a chemical reaction and the weeds proliferate.”

The model boats are all handmade. “Perry made most of them,” said club member Kenny Ringgold. “Perry also made the carts. The boats sit on the carts and can be wheeled down to the water.” 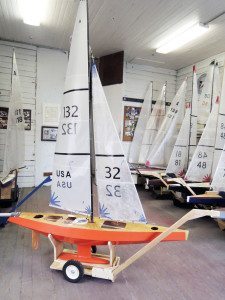 The club recently did its semi-annual pond cleanup. “As the informal stewards of the pond, we feel it’s in the community’s best interest to maintain this picturesque and ecologically valuable natural resource,” said Ringgold. 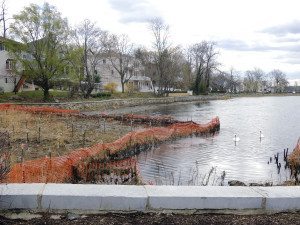 The Mill Pond Model Yacht Club has been racing model yachts in Port Washington’s Mill Pond for over 100 years. The club needs the town’s support to continue the tradition of model yacht sailing on Mill Pond. The club welcomes visitors to watch the boats sailing and get involved. 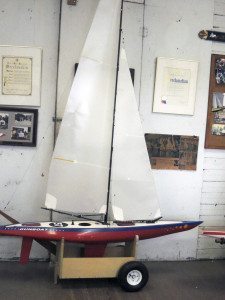