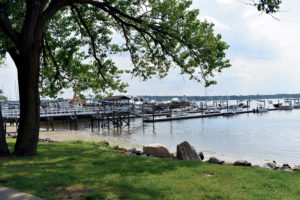 The Steering Committee helmed by Town of North Hempstead Councilwoman Mariann Dalimonte held a virtual meeting on Sept. 22 to discuss amendments to the waterfront business or BW district zoning code.

The BW district building moratorium, which has been in affect since 2017, does not permit construction on commercial private properties extending from Sunset Park to Manhasset Bay Yacht Club and the area south of Town Dock.

Dalimonte began the meeting by clarifying some misconceptions about the proposed code changes.

The moratorium has been in place for three years, and has been extended six times.

Although the moratorium was initially supposed to end on Sept. 14, it was ultimately extended to allow for the Town Board to make more amendments to the existing code.
Dalimonte also addressed the residents attending the meeting and assured them that the proposed code changes are being created with the residents best interest in mind.

“Some of you attending the meeting tonight may be here because you are upset at all of the terrible things you’ve heard are being proposed on our waterfront,” Dalimonte said.

“Unfortunately, there has been a lot of inaccurate, misleading and sensational information being spread throughout the community, in the form of posters, flyers and messages on social media. One recent example was a poster with a photo of what appeared to be a four-story building spanning the entire property from end-to-end. The proposed code has several protections against this sort of development.”

Dalimonte pointed out that there have been 22 public meetings and that this was the 10th Steering Committee meeting regarding the proposed code changes.

“I have received a number of emails and phone calls demanding that the moratorium be extended yet again and that the discussion about the proposed code be started again from scratch,” Dalimonte said. “I hope that this list and these numbers make it clear that a lot of hard work has already gone into this and that the public has had ample opportunity to be heard.”

The proposed BW-zone code changes would permit any of the following businesses in the area, including gyms, health clubs, dance studios, a grocery store, retail food-use, a delicatessen or any similar store less than 2,000 square feet. Businesses without direct waterfront access would need to apply for a special uses permit. Restaurants, bars or lounges would not be permitted to have outdoor seating above the ground floor of any building.

The proposed changes also include a reduction in height, “no building shall exceed two stories, with a maximum height of 30 feet,” although “minor structural and/or architectural elements may extend a maximum of ten feet above the allowable roof height, provided they comprise no more than 10 percent of the total roof area and be set back a minimum of ten feet from the front building wall and five feet from all other building walls.”
Lot coverage would allow “buildings and structures to occupy 60 percent of the lot area. A front yard of at least 10-feet is required for all buildings exceeding one story or 20-feet in height. Rear yard setbacks would need to be at least 25-feet where the rear yard of the lot abuts a waterway. Lots with rear yards abutting a land parcel shall have a minimum setback of twenty feet.

Parking for all categories of residential buildings or for the residential portion of a multiple-use building shall be provided at the rate of at least two spaces per dwelling unit.
Residents along with the Steering Committee members gave their feedback and concerns regarding the proposed code. Some residents stated that they were concerned about the access to the waterfront being diminished due to the code changes, other residents wondered how these proposed changes might affect economic viability. The Steering Committee is set to have their final public hearing regarding the proposed zoning code changes on Tuesday, Oct. 6 at 7 p.m. via zoom. Residents will have the opportunity to ask questions of the board regarding the proposed code. To register for the meeting, visit www.us02web.zoom.us/webinar/register/WN_cWqa50ISQJuQuQh2Gh_DxQ.