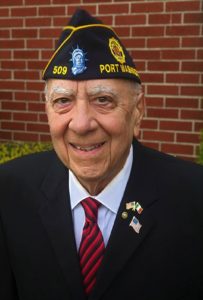 Tom went to St. Paul’s Grammar School and Boys High School in Brooklyn and was mentored by the Brothers of the Saint Francis Monastery Order, who lived next to Tom’s home and for whom Tom did many chores. Upon graduating from Boys High School, Tom noticed an advertisement by a national bank seeking new high school graduates as employees. Tom applied, was hired and was given training as a teller. Shortly thereafter Tom received a notice on Nov. 2, 1955, informing him that he was being called to military service for his country and was to report to Whitehall Street in Manhattan at 6 a.m. Tom was then 22 years old. His father had died when he was 13 years old. His mother and sisters depended him. The induction officer understood his concern, but the priority was service to his country. Tom was immediately inducted and advised, “You’re in the army now.” The day before he went to Whitehall Street, Tom celebrated a farewell party with his colleagues at a restaurant. The farewells lasted until late in the evening.

During the ensuing years in the army, the manager and colleagues at the bank forwarded to Tom overseas care packages that were gratefully received and shared by Tom and the other soldiers.

Soldier Tom was rigorously and vigorously trained at Fort Dix and in due course was shipped to France where he and thousands of others were trained for an invasion if needed in southern France. As a young soldier in France, Tom acquired deep appreciation for the sacrifices and hardships endured by the young men and women called to serve and protect their country.

After serving two years, Tom was honorably discharged from the U.S. Army. He was given a subway token and $20 pay, Tom went home to Butler Street in Brooklyn. He courted, Rose, the girl next door, they were married in 1960. Thomas and Rose became residents of Port Washington in 1962. Their children were brought up in Manorhaven, where Tom Pugliese still lives in the house he and his wife purchased in 1962. The two children of the marriage are their son, Vincent Pugliese who now resides in Woodbridge, VA and their daughter Dr. Madeline Pugliese, a pediatrician who lives and works in Port Washington. Madeline is married to Antonio Di Caro and they have five children.

Tom has contributed to his community in Manorhaven Village by serving on the Ethics Committee. He returned to his banking career after being discharged from the Army. His banking career spanned 48.9 years. His work included many banking positions, auditing, monitoring foreign currency transactions, opening new branches and streamlining procedures.

Tom is proud that his son Vincent graduated college and ROTC training at Cornell University. Vincent chose a military career, which included responsibility for armored tanks (M-1 tanks) and military intelligence. Vincent retired with the rank of LT Colonel.
Tom is proud of his country and grateful to its military, served the work of the American Legion in remembering and honoring our veterans and caring for the ill and the disabled veterans.