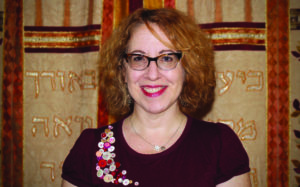 After Cantor Baruch Blum retired from his more than 40 years with Temple Beth Israel (TBI), the synagogue hired Cantor Sharon Grainer, who brings extensive experience working as a cantor since being invested in 2006 at the Jewish Theological Seminary.

TBI put together a cantor search last year upon hearing of Blum’s retirement. More than 25 people applied for the position, but TBI brought in five of those people for in-person interviews and to hear them lead various prayer services. After the interviews, Rabbi Michael Mishkin along with the committee felt that Grainer was the perfect fit for the TBI community.

“Cantor Grainer cares deeply about people,” said Mishkin. “This was obvious when we met her, and we heard it over and over again from her references. Cantor Grainer is a cantor because she wants to connect with people, support them during difficult times and celebrate with them at their moments of joy. A second reason we chose Cantor Grainer is because she has a beautiful voice. A third reason we chose [her] is because some cantors like to be soloists and other strive to be more like song leaders, inspiring the congregation and helping them become active participants in the prayer service. Cantor Grainer falls into that second category.”

Grainer explained that she hadn’t been looking to pursue another pulpit, but after browsing the cantor assembly’s website, she saw TBI’s listing and felt it was bashert.

“The way they described themselves was unique and special and it struck a chord with me because what they wrote were many of the different reasons I got into in the first place,” said Grainer.

The listing stated that the synagogue’s primary goals were to create a warm, participatory and welcoming egalitarian synagogue community, where members can celebrate their simchas, mourn losses and grow as individuals and as Jews.

“I want to help people strengthen their Jewish identity and build Jewish community,” said Grainer as to why she became a cantor. “I thought I’d become a cantor, not a rabbi, because I believed you should have different leaders who have different strengths in the community and different passions. If I had a passion for the sound of prayer, that passion should resonate with other people. You need people in different roles to have more entry ways to get people to feel included.”

Grainer’s focus is just that—to make everyone feel included, whether they are learned, unaffiliated or a convert. Grainer made this her main focus because, at 23 years old, she considered herself an unaffiliated Jew, but after joining a Tzfat program that was created for Jewish young adults who didn’t know how to ask about their heritage, it changed her life.
Grainer went on to study Jewish history and literature with a minor in Yiddish at the University of Toronto in Canada. She then became a director at the Rhode Island Jewish Young Adult Project, where she designed programming to build and strengthen a sense of community among young professionals, a Jewish Life Director at JTS and Jewish Life in New York City and a spiritual leader at the Congregation Degel Israel in Watertown. Grainer was a cantor at Congregation Ohr Shalom in Orange, CT, Shomrei Torah in Wayne, NJ, and Temple Beth Zion—Beth Israel in Philadelphia, PA.

“My perspective always for leading was I wanted people to have what I wish I had had,” said Grainer. “I wanted people from all different learning capacities, learned or those that do not know how to ask, to feel that they can be engaged and included, to feel that they can sing with me. In addition, I believed in not just being the leader of the prayer, but being an educator and providing the resources I had. Whether knowledgeable or not knowledgeable, I wanted them to have the gift of the tradition accessible.”

To make the prayers more accessible, Grainer continues to work on her senior project, which was a written component that had the Hebrew, transliteration and information about the prayers including their meaning and why they are applicable in today’s world. Grainer recorded a bunch of melodies—all of the melodies she had learned for each of the prayers—and compiled them so others could access them.

“Somebody has a doorway in, so they don’t feel like an outsider,” said of the project.