Every August, a great event takes place on our bay. This international event, called the Manhasset Bay Match Race for the Knickerbocker Cup, attracts world renowned match racers. The

Knickerbocker Cup is a qualifier for the World Match Racing Tour, with the winner gaining an automatic entry to the Argo Gold Cup, one of the most prestigious match racing events in the international sailing world. Nine teams from around the world have been invited to compete this year. From Thursday, Aug. 4, through Sunday, Aug. 9, Manhasset Bay will be filled with match racing from mid-morning to late afternoon. If you are out on the water or walking along the waterfront, you will be treated to some of the world’s best match racing. 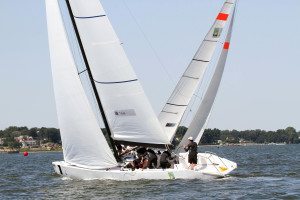 As in past years, this year’s event is part of a series of four consecutive match races called the U.S. Grand Slam Match Race Series. The Manhasset Bay Match Race for the Knickerbocker Cup is the first stop on the tour, followed by Oakcliff Sailing Center, Aug. 13 to 16, then Chicago Match Race Center, Aug. 21 to 23, with the final stop at Bayview YC, Detroit, MI, from Aug. 27 to 30. Having back-to-back events to entice international racers to the U.S. makes sense. With the Grand Slam Match Race Series, international match racers can spend a month in the U.S. and get top-level racing under their belt with minimal airfares.

As the 33rd Manhasset Bay Match Race for the Knickerbocker Cup begins, excitement is building, not just locally, but across the country and internationally. With teams hailing from Switzerland, New Zealand, Australia, Finland and the U.S., viewers from around the world will be watching the action as nine ISAF top-ranked teams go head-to-head to vie for a podium finish, which brings with it an automatic entry into the Argo Group Gold Cup, in Hamilton, Bermuda, a stop on the prestigious World Match Racing Tour. 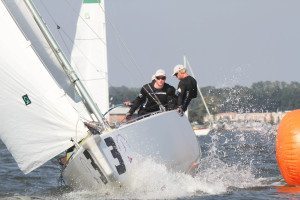 Eric Monnin, Team Sailbox, won this event last year and is back to try a repeat. But Monnin will have his work cut out for him. There are always upsets and interesting roadblocks to a podium finish in this event. Manhasset Bay, with its variable winds and currents, can slay the best match racer. Add in some excellent young talent, the New Zealander, Chris Steele, who will be going after Monnin in a big way, and factor in our “hometown” guy, David Storrs, who is at the top of his game, and this is going to be one terrific event. 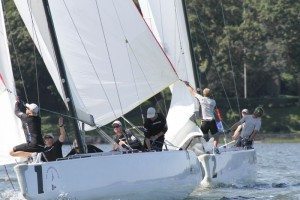 “This growth in interest has been phenomenal,” said U.S. SAILING’s Match Racing Committee Chairman and U.S. Sailing Team AlphaGraphics match racing coach Dave Perry. “We’ve been fortunate to have some enthusiastic clubs and patrons help support the game, including forming some new match racing centers around the U.S.” Perry continued, “The integration of these regattas will make it much easier now for sailors to compete in their local and regional areas to improve their game and gain valuable ISAF Ranking Points, and as their ranking improves they will have the opportunity to race in higher level events, and maybe even get onto the World Match Racing Tour.” 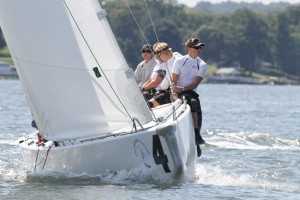 The late Edward du Moulin, a past Commodore of Knickerbocker YC, a member of the New York YC and the Storm Trysail Club and an inductee into the America’s Cup Hall of Fame, and his friend, the late Arthur Knapp, founded the Knickerbocker Cup in 1982 to bring match racing to the East Coast. Since then, the Cup has grown in prestige and has become a platform for launching many match racing careers. The Cup winners get their names etched on the perpetual trophy. This year’s winner will be in good company with previous winners: Ed Baird, Peter Holmberg, Peter Gilmour, Paul Cayard, Russell Coutts, Terry Hutchinson, Ian Williams, Reuben Corbett, Phil Robertson, Laurie Jury, Nicholai Sehested, Eric Monnin and Long Island Sound sailors, Dave Dellenbaugh, Dave Perry and Rich du Moulin. Many of these winners have gone to race in the World Match Racing Tour, the world’s premier match racing event.