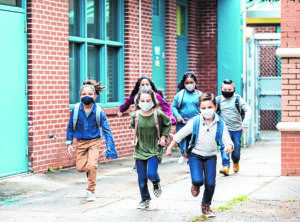 We have entered a phase where it is now abundantly clear that children are at an extraordinarily low risk of becoming severely ill from COVID-19. It has also been made glaringly obvious—both in observation and by looking at hard data—the irreversible harm we are causing our children through continued masking and quarantining.
Social development, linguistic/speech development and the simple joy of smiling with friends which provides a sense of love through friendship has been hindered for months and years in school and daycare settings. This is now irrefutable and documented with hard data.
A recent article by Johns Hopkins’ Marty Makary M.D., M.P.H. unpacks the impact of the draconian mask mandates on children’s mental health and development:
“A study conducted by The Jed Foundation, a nonprofit that combats suicide among young people, found that, over the course of 2020, 31 percent of parents said their child’s mental health was worse than before the pandemic. There has been a surge in hospital visits for self-harm, a surge that was particularly acute among adolescent girls. The U.S. Surgeon General recently declared a mental health crisis among young people globally, citing 25 percent of youth experiencing depressive symptoms and 20 percent experiencing anxiety symptoms.”
Silence and compliance regarding the continued masking of our children can only now be looked at as being complicit and in support of this continued harm and dehumanization of our children. To the directors and board members that continue to say their hands are tied—it’s time to take a stance. To the parents that are complacent—it’s time to take a stance.
If you are not proactively working on a daily basis and communicating your actions to remove masks from our children, you should expect to be held accountable for the distress you’ve caused them.
If you are not proactively working on a daily basis and communicating your plan to address how to reconcile for the most critical years in their growth they were robbed of, you should expect to be held accountable for the harm you’ve caused them.
We as parents will not forget the proponents of the continued inhuman policies and mandates implemented. We will also not forget those who made no attempt to take action to bring our children’s lives back to normal as fast as possible. Our children will not forget the year they couldn’t share laughs with their new friends in class or when their senior prom was cancelled.
Hopping on the bandwagon and attempting to empathize after the fact will not absolve you from the pain you have caused in our children. Do something to demonstrate where you stand now.
—Michael Breslin, Port Washington Resident