Lifelong Port Washington resident Mariann Dalimonte was named this year’s Pride in Port Community Honoree. With countless hours spent volunteering for many organizations to raise funds, better programs and improve the quality of education while raising three children and working full time, the Pride in Port Committee felt Dalimonte was more than deserving of this year’s honor.

“The Pride in Port Committee always selects very deserving honorees for the Parade Grand Marshall and Community Honoree, but this year’s choices are truly exceptional,” committee co-chair Barbara Faticone said. “Residents Forward and Mariann Dalimonte demonstrate an outstanding level of community pride, which is clearly what Pride in Port is all about. On behalf of the entire Committee, we thank and applaud both honorees.”

“I’m very honored that I have been chosen to be the community honoree and look forward to celebrating with family and friends,” said Dalimonte of the honor.

Dalimonte is a third-generation born and raised Port resident who began her volunteerships after a successful career as director of operations at Sony Music/Epic Records. After Dalimonte had her first child, Amanda, she decided to leave her career and focus on raising her family and getting involved with her community. She decided to start out small, joining a few committees in Port Washington Union Free School District.

“I love Port Washington and want to make it an even better place for all,” said Dalimonte of why she volunteers.

In 2012, Dalimonte was a recipient of the Port Washington Chamber of Commerce Appreciation Award and in 2017, she was named to the Town of North Hempstead Women’s Roll of Honor.

Dalimonte will be honored at the Pride in Port Dinner Dance starting at 7 p.m. at the Polish American Hall located at 5 Pulaski Place, Port Washington. 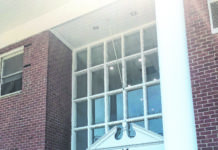 Iconic Port Office Building Gets A Facelift Thanks To Grant

Iconic Port Office Building Gets A Facelift Thanks To Grant