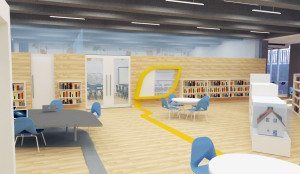 “We’re so excited and want it to happen already,” said Library Director Nancy Curtin and Children’s Room Director Rachael Fox in an interview with the Port Washington News.

“The Children’s Room is perhaps the most important room in the library,” they stated. “It’s where we begin our relationship with families in the community.” The new Children’s Room will be completely rebuilt, with new design, furnishings, technology and more space for kids and tweens to learn, explore and create.

Severe overcrowding and an outdated facility have been hampering the ability of the library to serve the needs of its youngest patrons and the parents and caretakers who visit with them, Curtin said. The Children’s Library plays an essential role in supporting early literacy within our community. The library felt the need to improve its tools for reaching all preschoolers. “The Children’s Library is often the only place outside the home where babies and very small children are exposed to talking, singing, reading and play prior to preschool,” according to the PWPL website.

“We used to start seeing kids at around three and a half years old in the Children’s Room,” Curtin said. But, today many younger children and their caregivers are users of the library. In addition, with a program called Baby Bump, the library has, in recent years, begun working with expectant parents seeking information on CPR, first aid, birthing techniques, among other things. “This is a big role for the library now,” Curtin said. Yet, the existing facility has been unable to accommodate the increased number of users of the Children’s Room.

When it was last renovated in the early 1990s, the Children’s Room was used primarily as an archive for books. The Children’s Room still has a large physical collection, but because there are so many more options today to access information, including the library’s website, which is available 24 hours a day, the physical collection is not as important as other roles of the library. “Our role has expanded significantly,” Curtin stated.

The library began discussions about the renovation three or four years ago. The staff “started looking at how to give children the opportunity to learn in the ways that best suit them,” Curtin said. Plans were designed by the Lee H. Skolnick Architecture & Design Partnership, a New York firm that has designed successful children’s facilities for other libraries and museums. The new Children’s Room will offer dedicated spaces for creative projects. A workshop, music recording stations, quiet study area, a recycling center, a play and discovery area and a dedicated section for tweens (fifth & sixth graders) will bring new excitement to the room. The story circle will be a flexible, expandable area, to eliminate the current overflowing crowds. The outdoor garden will be redesigned, with new educational elements added, so kids and their parents can take full advantage of the spacious outdoor area.

The project will be funded by grants, private donations and funds previously set aside in capital project reserves. Residents’ taxes will not be raised. “This was the first big capital campaign project given to the Port Washington Library Foundation,” Curtin said. Many members of the Port Washington community have already contributed to the $1.4 million that has been raised to date. In recognition of the significant contribution made by Sands Point resident Hal Spielman, the new Children’s Room will be named the Jackie and Hal Spielman Children’s Library. In addition, Senator Jack Martins has received a $150,000 grant from the Dormitory Authority of the State of New York for the renovation. This fall, the library will give the entire community the opportunity to financially contribute to the project. Donations can also be made online at www.pwpl.org/anewleaf. The library’s goal is to raise $1.8 million to completely fund the renovation.

“Our anticipation is that the renovation will increase the number of users in the Children’s Room,” Fox said. “Although we offer many workshops now, we will be able to increase the number and type of workshops in the new space,” she said, adding that “we want to do more hands-on programs.” The Children’s Room is currently staffed with three full-time and three part-time employees. Although no new staff is anticipated being added, replacements will be sought for several staff members who have recently retired, Curtin said.

During the renovation, the Children’s Room will be relocated to the media wing of the library. The current media wing will relocate to the third floor and will be able to operate with a smaller collection due to changes in technology, Curtin said. “We do not anticipate any dust or mess during the construction because the room will be closed,” Curtin said, adding that “we will try to stay open during the entire renovation.” 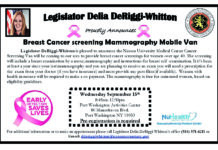 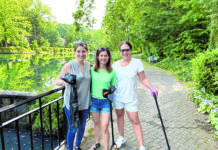