Seven years in the making, Port resident and filmmaker Margaret Galbraith will see her documentary Stickman come to life on screen at SR Socially Relevant Film Festival New York, a 501(c)3 film festival founded by actress Nora Armani, at Cinema Village. The opening film on March 16 will be followed by Galbraith’s Stickman which follows Dallas homeless man, Roosevelt Wilkerson, whose passion for carving walking sticks connects him to a world beyond the streets and launches him on an incredible journey.

“It was fantastic,” said Galbraith, explaining how she felt about her film hitting the big screen at its first premiere in Dallas, TX. “At the USA Film Festival, except for Roosevelt, I had almost all of the characters and it was very gratifying to see it. They felt I had represented them well and, as a filmmaker, you want to do your subjects justice, and I only wish Roosevelt had been there.” 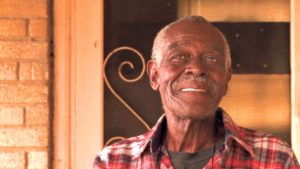 Galbraith, who originally had a career in community development, became interested in documentary films when she realized it was a tool for community development and social change. Having attended both NYU and the New School, Galbraith completed two short documentaries, Krumbs and Salsa Salon. While looking for her next story, Galbraith heard of a man who carved walking sticks through her mother who lived in Texas.

The documentary recreates some of Wilkerson’s past when he was homeless after incarceration and follows his story from there. Galbraith explained that one day “in a fit of rage, Wilkerson picked up a stick and started carving it.” After art enthusiast Carol Brewer saw Wilkerson’s creation, she and Texas socialite Susan Nowlin, who become his benefactors, started and managed a successful distribution business for his hand-carved sticks, getting them into the hands of numerous celebrities and world leaders. One of the hand-carved walking sticks was even gifted to Pope Benedict XVI by then President George W. Bush. With the proceeds from the business and the help of others, Wilkerson and his wife were eventually able to move into a home of their own; however, Wilkerson passed away in December of 2015, never seeing the completed film.

“I was really trying to make people feel the experience of Roosevelt and see his humanity,” said Galbraith. “He was also in jail and did some bad things and people need second chances, need help and can change their own lives. I also hope the film makes other people get involved.”

The film will be shown at 9:30 p.m. at Cinema Village, located at 22 E 12th St., New York.
For more information about the film, visit www.stickmandoc.com.