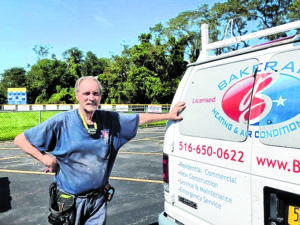 Paul Mark Baker, a lifelong Port Washington resident, passed away on Nov. 8 at the age of 71 after a long and brave battle with cancer.

Born in 1950, Paul Mark was the second-generation Baker in Port Washington, predeceased by his father Willard “Bubba” Baker and his mother, Jane. Baker attended the Port schools, graduated from Schreiber High School and went on to join the Air Force to fight in the Vietnam War. After the war, he worked in the AC/Heating business all his life, mentoring his young son, Kris, who (like his father) grew up to be a master in the trade and opening his own business, Baker Air. When Mark Paul retired, his greatest pleasure was working side by side with his son at Baker Air for years before he was too ill to work.

Perhaps the greatest passion the father/son team enjoyed on their leisure time was “all things paranormal.” Their reputation grew over the years as well-known Ghost Hunters on Long Island and elsewhere where they monitored and captured paranormal activities in homes and inns.

Baker also nurtured the “artist-within” by writing and playing songs on his guitar when he was at home with his wife and only son.

He leaves his devoted lifelong wife, Krua Baker, his son, Kris, daughter-in-law Gina (Martone) Baker, grandchildren Olivia and Cora and a stepson (Lek Leekhool). A memorial celebration of his life is pending.