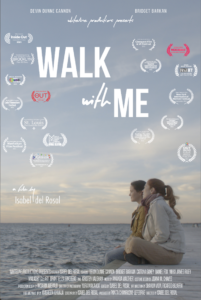 The Port Washington Public Library welcomes filmmaker Isabel del Rosal for a public screening and discussion of her new film, Walk with Me, as the library continues to celebrate Pride Month throughout June.
Isabel del Rosal is a Brooklyn based filmmaker and Walk With Me (2021, 112 min.) is her debut feature film. The film follows Amber (Devin Dunne Cannon) as she is forced to start over at the age of 30 with a young daughter, after building up the courage to leave her husband and the only life she has ever known. As she struggles, she meets Logan (Bridget Barkan), a free-spirited musician who lends an ear to Amber’s situation. What starts out as a close friendship quickly evolves into an unexpected romance. Walk With Me explores what it means to be a woman, a mother, a daughter and a lover—how we embrace and reject who we are, and how we eventually learn to stand tall in our own shoes.
Walk With Me has screened at 20 festivals worldwide, with more to come. It has won the Spirit Award and Best Actor at Brooklyn Film Festival, Best Emerging Director at Manhattan Film Festival, Best LGBTQ Film at Lady Filmmakers, Best Female Composer at Toronto Int’l Women’s Film Festival, Best Feature at New York Int’l Women’s Film Festival amongst many other awards and nominations. Walk With Me is one of two sponsored films at this year’s BFI Flare in London and is an official Pride film at organizations all over the US. After the screening, filmmaker Isabel del Rosal will take questions from the audience and discuss the making of the film.
This free event is co-sponsored by Be the Rainbow, an LGBTQIA+ inclusivity and visibility organization based in Port Washington.
—Submitted by the
Port Washington Public Library