On Thursday, March 30, the Port Washington Public Library held a public meeting to discuss the library’s operating budget for the fiscal year ending on June 30, 2017. A crowd of 25 filled the room. The meeting also provided an opportunity for library patrons to hear from the candidates for the library’s board of trustees.

Library Director Nancy Curtin gave a brief overview of the projected 2016-17 budget. The budget has a 1.39 percent levy increase, which is within the New York State allowable tax cap.

“I love this library and I love that this community is part of it,” Comer said.

The candidates answered questions from the audience and explained their backgrounds and what they hope to accomplish if elected. One audience member asked what changes they would make to the library if elected. Siegel said that he would focus on how patrons are changing their work habits in the library and would adjust accordingly. Since more patrons are using the quiet study rooms, he said that he would be in favor of building more study rooms to accommodate this change. The new rooms would allow the patrons to work in groups or alone without the fear of constantly being interrupted. Keller, on the other hand, said that he would focus on bringing new technology to the library for patron use. He cited the 3D printer as one new piece of technology the library could make available to its visitors. Kruger cited the importance of the community’s input on how the library could improve down the road.

The candidates were also asked how they would repurpose space in the library. Comer suggested that the computer room should be spread throughout the library so there are different segments in various parts of the library. Siegel made references to the quality of the chairs in the room throughout the meeting. He said that since he is in the library almost every day, he has a unique perspective on how he would repurpose space. Siegel also stated that with an extra half million dollars added to the budget, he would seek to improve the furniture and technology.

The library trustee election and budget vote will be held on Tuesday, April 12, from 7 a.m. to 9 p.m., at
the library.

“Hope Through the Eyes of an Immigrant” 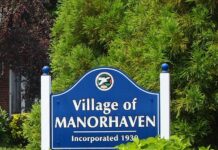 The Village Of Manorhaven’s New Mayor