I am writing to urge your readers to support Bill Keller for a second term as a trustee of the Port Washington Public Library (PWPL). I can think of no one better suited for the position.
I have known Bill all my life. We grew up together in Port Washington. I know Bill to be a person of the utmost intelligence and integrity. He loves Port Washington; in fact, after living elsewhere for a number of years, he decided to resettle here. He chose Port for many reasons, including his love of the community and his respect for our school system. Bill’s youngest son received an excellent education in the Port schools; he is now a student at the University of Pennsylvania. In addition, Bill has been active in the community. Before he served as Library Trustee, he served on the Education Foundation Advisory Board and the Port Washington School District Legislative and Governmental Affairs Committee.

Bill’s professional life further qualifies him for a second term on the library board. Most recently, Bill recently retired as the Vice President for Finance and Administration of Queens College, CUNY. He was responsible for budgeting, technology, facilities operations and construction, human resources, and strategic planning. His experience makes him a very valuable member of the PWPL Board for he can provide oversight for these critical finance and management functions at the PWPL.

In the years ahead, the Library will continue to face new challenges. Bill’s expertise and experience, as well as his love of our town, make him ideally suited to serve once again as library trustee. As he did in his first term, he will take his charge seriously and devote himself fully to doing the best job he can. The library would be lucky to have him on its board for another term.

So vote for Bill Keller on Tuesday, April 13. Voting is at the Library Building from 7 a.m. to 9 p.m. 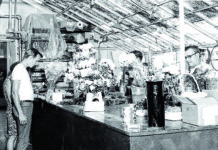