After finishing two years at Nichols Community College, Read transferred to Syracuse University’s School of Business for his junior and senior years and graduated in 1953. However, a perceptive Dean suggested he would be perfect for Syracuse’s Communications School majoring in speech, radio and television. “I had a great speech teacher—Dr. Allardice—whose class is always 8 o’clock in the morning,” said Read. “She would ask someone to read something and she would say ‘You’re not listening to yourself.’ Then she asked me to read the same thing. Allardice would say, ‘Now listen to him.’ I was usually fighting—shall we say—a hangover. She gave me an ‘A’ for the course and a lot of self-confidence.”

There’s that voice again, so I had to ask. “With a voice like yours, how come you never became a professional announcer?” With an unhappy, almost belligerent look, Read said, “You really want to know?” He didn’t wait for my answer. “

Because after graduating, I went on some auditions. The person in charge would hand me a list of maybe three pages of classical composers and tell me to read the list. And I said, ‘Read the list! I don’t even like the music at this point,’ and handed it back to him.”

That was it! Almost with the “speed of summer lightning” (thank you, Alan Jay Lerner), Read headed for Manhattan and the “hiring lady” at NBC. With charm and bravado, our hero walked in and said, “All right, what is it going to be? Will I be a page or a guide?” The hiring lady looked up at this handsome devil in front of her and said, “Oh, don’t you want to be president?” Said he in reply, “That’ll come.” Said she in reply, “You’d be terrific as a guide.” Read said, “Great, when do we start?” The timing was perfect, and he was now officially a uniformed NBC guide with the French-style shirt that was so heavily starched that anyone who attempted to give him the finger in the chest would break his finger. 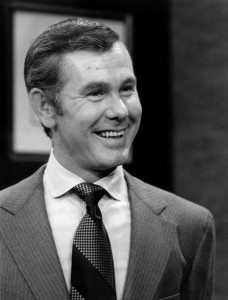 Things got a little hairy for the networks coast-to-coast. They were in trouble. “They even laid off a pitiful little 60-year-old lady who lived alone and worked in our library,” said Read. He thought to himself, “Holy mackerel, why do I want to stay around here?” He answered his own question, he didn’t.

About the time that Read was about to become a pioneer, I was working on the first Johnny Carson show. As fate would have it, we’re in the Little Theater, next to Sardi’s, trying to put our show together for the day. Down the aisle comes this dapper, good-looking young fellow carrying a large suitcase. Who? Who else? It was Les Read. And he was in the business of developing the TelePrompTer Corporation. He must’ve found us easy pickings because teleprompters became a permanent fixture.

As you are about to find out, I am not a techie. But, as they say, fools rush in, my conscience prompts me to tell you this: The device features an adjustable podium (goes up and down, according to speaker’s height) with a rectangular opening from which the performer/speaker can read the script, which has been printed on a roll of paper. The roll turns around in sync with the person reading the script.

In our case, the TelePrompTer allowed Carson to move about but still keep his eye on the script if necessary. While, in time, because they became comfortable with the TelePrompTer, performers sometimes took liberties with the script. That is, except for one thing: the advertisers insist that their copy be read exactly as written. Today, nothing is printed on paper. Teleprompters have gone digital.

Timing is everything. If it’s on your side, you win.

Read was in Elmira, NY, working on problems that had arisen in TelePrompTer’s operations there. Meanwhile, back in New York, HBO’s founder, Chuck Dolan (Charles F. Dolan, Cablevision) was about to sell HBO to Time Inc. A friend of Read’s who was doing public relations for Dolan called Read to advise him to call the new president of HBO.

One thing about Les Read, there’s nothing wrong with his hearing (not way back then, anyway) or his ability to make the best of an opportunity.

Now an executive at HBO, where do you think he winds up? You got it: Elmira, where he stayed in total a year and a half. Now established as a go-to guy for HBO, he was looking forward to coming back to Manhattan when a phone call came from his boss with the good news: The company needed him to go to work his magic at HBO’s major installation at Great Falls, Montana. He was deliriously unhappy about it, but good soldier that he was, he threw his clothes in the back of his red Ford Thunderbird (one of the loves of his life) and headed for Great Falls—totally unaware of what lay ahead.

In time, Read felt at home in Great Falls, and he had operations at HBO running smoothly. But now, with a little time to think about himself, Les did what any other normal red-blooded American young buck would do, he got that old yen again. And Cole Porter’s gods who handled such matters were on his side. Les is sitting at the bar of St. Duffy’s (no church, nickname for an upscale pub) during a Friday night social and in walks the radiant Anne Erikson with two friends. Les throws caution to the wind and asks Anne for a date. The lady demurs. She teaches music at the local schools and has a full plate. He persists. She accedes. Looking good! But ever the smooth one, Les says, “I suppose you wouldn’t want a guy who is not going to be in Great Falls much longer?” Anne trumps him with, “Why don’t you let me make that decision?”

With Anne’s decision in his favor, the two pile into the Thunderbird and head for Les’ parents in Port Washington. He proposes to her on the Town Dock. The wedding is in Great Falls, and there is only one slight difficulty. Anne’s grandmother, a stern Lutheran, is a teetotaler—no booze; but the Reads, also God-fearing folk, have no such inhibitions. The solution was a long table at the reception at which the Eriksons sat at one end where only punch was served; at the other end, the Reads had access to more potent libations.

That was 51 years ago, 30 of which Read spent as an officer and as the face of HBO. Until he retired in 2002, he was known as Mister HBO. Today, he is one of the 500 members of Cable TV Pioneers and serves as the organization’s executive director.

The Reads have four children (Scott, Liz, Charles, and Jennifer) and 10 grandchildren.