New York State Senator Anna M. Kaplan (D-Great Neck) recently met with the members of the Schreiber Student Advocacy Club (SSAC). SSAC was started by sisters Alexandra and Isabella Marks, along with teacher, Gennaro Fontano, at Paul D. Schreiber high school, in the midst of the changing world and the nation’s conflict.

Kaplan, who made history by becoming the first Persian-American former refugee to be elected to the State Legislature described to the students how she and her brother were sent to the US from Tehran amidst persecution in 1979 and how “because of a country that gave her so much,” she wanted to give back by serving her community. 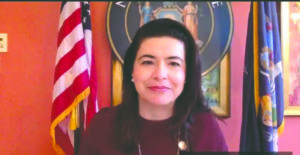 Kaplan (D-Great Neck) unseated a long-standing Republican seat and in flipping the New York State Senate to Democrats they “were able to pass legislation that was going to Albany for decades and never getting to the Senate Floor for a vote.”

When asked by SSAC Press Secretary Avery LaRosa what the most important part of her job was, Kaplan answered “I think the most important part of any elected official is to really be responsive to their constituents and their residents. When they call up and ask for help to try to be able to address that help. But, I also think a big part of our job is really passing laws and when we pass laws…the decisions we make impact 19.5 million people across New York State.”

On the topic of passing laws, founder Alexandra Marks asked Kaplan about her most crowning achievement, the fight for “common sense gun laws.” The Senator talked to the students about the bill she is most proud of; “The Scott J. Beigel Unfinished Receivers Act” which, prohibits the possession of unfinished frames or receivers without a gunsmith license; prohibits the possession of major components of a firearm, rifle, or shotgun by persons who are otherwise lawfully prohibited from possessing such weapons; and makes it illegal to sell or transfer an unfinished frame or receiver to anyone other than a licensed gunsmith. Currently, it’s not unlawful to own these so-called “ghost guns.” The bill has passed the State Senate and is working its way through the NY State Assembly. The bill is named after Scott J. Beigel, a teacher and Long Island Native, who was killed three years ago in a mass shooting at Marjorie Stoneman Douglas High School in Parkland, Florida.

The SSAC is extremely interested in advocating change in the prevention of gun violence. In January, the group spoke with Paul May, the President of New Yorkers against Gun Violence to discuss gun reform legislation. You can watch here: http://bit.ly/3r2AV96.

In COVID times, SSAC holds their meetings via Zoom. Contact the SSAC if you are intrested in joining their meetings to find out more about how local teenagers are educating themselves on changing the world.