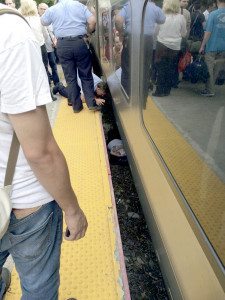 Sima Hakimiam, the Great Neck resident who fell onto the track exiting a Port Washington-bound LIRR train, found out that she also has a broken clavicle. Hakimiam, 65, was originally diagnosed with fractured ribs and a collapsed lung.

On July 2, Hakimiam was exiting a 5:11 p.m. train, trying to avoid a nine-inch gap. She was rescued from the track and rushed to the hospital.

Michael Levine, Hakimiam’s lawyer, confirmed her new injuries, and said that they are currently in the process of filing a claim to bring forth a lawsuit against the MTA. The notice of claim needs to be filed within 90 days of the incident, followed by a Section 50-H examination of the claim by the MTA. Once the claim process is complete, the lawsuit can proceed.

“All cases come down to issues of the size of the gap,” said Levine. “As of now, we are meeting and discussing her newly discovered injury.”

The LIRR refused to comment on the ongoing investigation, but indicated that it has reduced incidents involving gaps by 80 percent since 2007, when it spent $42.4 million on reducing the size of platform gaps.

The size of the gaps between the train and the station’s platform varies from station to station, topping off at about 13 inches on curved tracks.

In 2006, a Minnesota teenager fell through the gap at the Woodside LIRR station and was struck by a train, instantly killing her. Her family filed a notice of claim, asking for $5 million, but the total amount received by the family was never released due to confidentiality.

The LIRR reported that it experienced 34 gap incidents last year, a decrease of 33 percent from 2013.