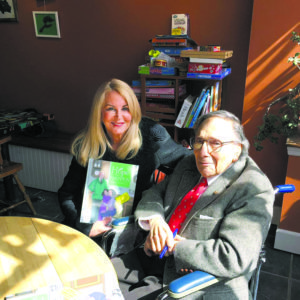 An accredited member of the Public Relations Society of American (PRSA), Blankman was elected to the PRSA’s prestigious College of Fellows when fewer than 300 public relations professionals in the U.S. were members of the college. To better serve the ever-growing public relations community on Long Island, in 1990, he was the driving force behind founding the Public Relations Professionals of Long Island, was the recipient of its Lifetime Achievement Award in 1997, and was made a lifetime member in 2009.

In several capacities, Blankman served on the Town of North Hempstead’s Planning Board and its Housing Authority. He chaired the Nassau County Task Force on Young Adult Housing and was the first  vice chair of the Nassau Legislature’s Commission on Revenue Generation and Economic Development. He also served as chairman of the Nassau County Planning Commission and a member of the County’s Board of Assessors. Governor George Pataki appointed him to serve on the Long Island Regional Economic Development Council.

An accomplished composer and musician, Blankman wrote the music and lyrics for the Off-Broadway produced play By Hex, a musical about the Amish of Lancaster County, PA, and for Cool Off, starring Stanley Holloway and Hermione Baddeley. He was a member of the Dramatists Guild, the American Society of Authors Composers and Publishers (ASCAP) and the Society of Professional Journalists.

In 2015, Blankman wrote and self-published the children’s book Hope Can Make It Happen, a charming and warm story of Christmas in a bygone era. He also wrote the music and book for a musical adaptation of Treasure Island, by Robert Louis Stevenson, specifically designed for elementary school children to perform.

As a devoted, lifelong patron of the arts, Blankman served as president of the Great Neck Symphony Society, vice chair of the Nassau Symphony Orchestra and as a member of the boards of the Manhasset Bay Opera and Eglevsky Ballet Company. Having also served for 15 years as a vice president and board member of the Long Island Philharmonic, Blankman was named an honorary director.

Blankman was a board member of the Long Island Chapter of the Anti-Defamation League (ADL) and a member of the Executive Committee of the Corporate Board of Advisors of the Cold Spring Harbor Laboratory’s Dolan DNA Learning Center.

Giving many years of service to his beloved community of Port Washington, Blankman devoted countless hours raising funds for numerous local charities including: the Community Chest of Port Washington’s Red Feather Campaign, which he co-chaired in 1967-1968; past president of the Chamber of Commerce; and was a founding member of Port Washington Children’s Center. In 2012, he co-founded the Cow Bay Theatre Company and produced Last of the Red Hot Lovers for the theatre group, which was successfully staged before sell-out crowds at Port’s Landmark on Main Street.

With a lifelong association with the Boy Scouts of America, Blankman was an Eagle Scout and in 1991 was awarded the rank of Distinguished Eagle Scout, an honor shared by fewer than 800 Americans at the time. He also was a member of the Executive Committee of the Nassau County Council and received its Theodore Roosevelt Rough Rider Award.

For his business activities, Blankman was recognized by Long Island Business News in 1995 as one of Long Island’s “Top 100 Influentials” and was presented with its Long Island Distinguished Leadership Award. He also received the Golden Rule Award from the Little Village, a school for developmentally disabled children. And he was named “Man of the Year” by the National Kidney Foundation of New York/New Jersey.

Blankman was a great friend to many and was close friends with Anton publisher Karl V. Anton, Jr. and became a mentor to publisher Angela Anton after her husband’s death. “My dear friend and mentor will be missed,” said Anton. “He was a sweet man and meant the world to me.” Blankman was a frequent contributor to the Port Washington News and wrote a column called “Everybody’s Port.”

Blankman attended Franklin & Marshall College and West Chester State Teachers College. During World War II, he was a member of the 514th Airborne Infantry Regiment of the 17th Airborne Divisions and the 59th AAA Battalion, CAC.

Blankman is survived by his wife of 50 years, the former Donna Farnsworth Smith of Schenectady, and his children: Deborah, Michael, Diana, Matthew and Sarah, and her fiancé, David Trzaska; and three loving grandchildren, Hannah, Sam and Alexandra.
A memorial service is being planned. Those desiring to express condolences may consider donating to the Community Chest of Port Washington, or a charity of personal choice, in Blankman’s name.