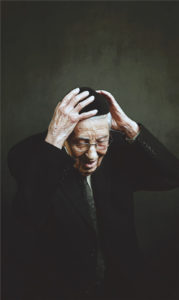 In commemoration of International Holocaust Remembrance Day on Jan. 27, the Adler Gallery at the Port Washington Public Library is presenting a photography exhibit, highlighting the resilience and hopefulness of Holocaust survivors. These survivors, originating from all over Europe, are currently residents of Nassau, Suffolk and Queens counties, including two residents from Port Washington, Gloria Glantz and Stan Ronnell.
A project three years in the making, photographer and project coordinator Danny Weiss, along with Dinah Kramer, photographed and interviewed 18 (18 signifying “Life” in Hebrew) Holocaust survivors. In conjunction with the photography, Rabbi Jodie Siff of the Reconstructionist Synagogue of the North Shore, will give a talk about the exhibit on Monday, Jan. 27. Weiss is a renowned photographer in New York City and Nassau County, whose journey began with his passion for creating unique, soulful images. Kramer works at the Holocaust Resource Center at Temple Judea in Manhasset and helps Rabbi Siff run the adopt-a-survivor program at the Reconstructionist Synagogue in Plandome.

The exhibit will feature large-format portrait photographs on canvas. Weiss refers to the project as an important way of celebrating those “brave individuals who not only survived but also rebuilt their lives after facing untold horrors.” Just children and teens at the time of the Holocaust, they persevered and today they have amazing outlooks on life. When asked what they believe can be done to fight indifference, hatred, racism and anti-Semitism today, the resounding answer was to educate future generations.

Spectrum Designs And Nicholas Center Celebrate A Decade Of Autism...