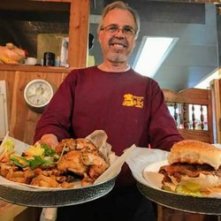 In business since 1984, Hickory’s BBQ Grill, located at 674 Port Washington Blvd. has been a staple in the Port Washington community for the past 35 years. After moving to Amarillo, TX in 1978, Ed Pappalardo, owner of Hickory’s BBQ Grill, fell in love with the authentic barbecue meals that Texas had to offer. After tasting the exquisite barbecue dishes, he began learning the trade of preparing smoked meats. Five years later when Pappalardo returned to Long Island, he was determined to bring authentic barbecue to the people of Long Island.

In 1984, Hickory’s fired up the smoker for the first time and has been in business ever since. The building, located on Port Washington boulevard, is more than 100 years old. The quaint restaurant seats only about 12 patrons at a time, but is still able to give off an authentic Roadhouse vibe, similar to what Pappalardo was accustomed to when he lived in Texas.

The food business has been an important staple in Pappalardo’s family. Pappalardo began his career by helping his father in the restaurant business. When Pappalardo’s father retired, he was able to assist his son with Hickory’s. Since his father passed away, Pappalardo’s son has taken on the tradition of helping him with the business.
“It’s really a pleasure to be able to work with my family,” Pappalardo said.

The Port Washington community has played a large role in the restaurant’s continued success throughout the years.

“We’re very familiar with all the customers,” Pappalardo said. “I have grandchildren of my customers coming in now, which is definitely nice. One of the great pleasures of the restaurant business is that you get to affect people’s lives in a positive way. People always seem the most pleasant when they are anticipating a good meal.”

In early 2017, Hickory’s BBQ was filmed for a featured on Restaurant Hunter, a feature created by Verizon’s Fios1News. During the segment, host Rob Petrone searched for the best eats on Long Island. The more than six minute feature aired in early 2018 and featured some of the best aspects of Hickory’s.

Hickory’s BBQ is located at 674 Port Washington Blvd., in Port Washington and is open Monday through Saturday from 11 a.m. to 8:30 p.m. Enjoy barbecue nearly every day of the week, Hickory’s is open for lunch and dinner. Take out, delivery and catering for parties is also available. For more information, visit https://www.restaurantji.com/ny/port-washington/hickorys-famous-wood-pit-bbq-grill-/