UPDATE: There is a limited availability for tickets to the event. Tickets can still be purchased at heartspw.org. 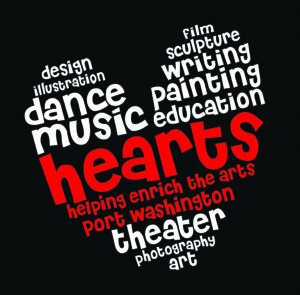 HEARTS, a nonprofit organization whose mission is to add meaningful value to children’s lives and the community by supporting, promoting and enriching the arts in Port and its’ public schools, will hold The Red Party on Thursday, Feb. 7, from 7 to 10 p.m. at the Port Washington Yacht Club located at 1 Yacht Club Dr.

The Red Party is an annual fundraising event in which all proceeds go directly to HEARTS’s grant programs for both school and community programs.

“HEARTS is proud to present The Red Party, our annual fundraising event that helps further our mission to enrich the arts in Port Washington’s public schools and across the community,” said founder Damon Gersh.

This year, The Red Party will honor Jim Avena and the Peter & Jeri Dejana Family Foundation and Michele Posner Goldman, a recent president of HEARTS and current board member.

The Dejana Foundation has been working with HEARTS for the past five years. Over that time, the foundation has supported HEARTS’s annual PortFest, The Red Party and provided general program funding.

“It is great to give, but it is also great to develop relationships with representatives of organizations like HEARTS as a partner of sorts in championing an important cause,” said Avena, who is the grant administrator for the Dejana Foundation. “I was very flattered when Stephanie and Joel approached me regarding having the Dejana Foundation and I as honorees for their 2019 Red Party. Of course, it’s a great feeling.”

Posner Goldman is a founding member of the HEARTS board and has been involved in the organization since it started operating in Port Washington in 2011. In two years, Posner Goldman became president of the board and held that role for five years.

“I think it has to do with my immediate past presidency and how I helped many others in the organization and helped build HEARTS to what it became today,” said Posner Goldman of why she believes she was chosen. “It was definitely a labor of love and a group effort. I’m very honored to be in this position for The Red Party and very grateful to live in a community that celebrates the arts in this way and very thankful for the friendships and relationships I’ve formed as a result of HEARTS.”

“It means so much to me to receive the HEARTS Founders Award at this year’s Red Party,” said Fine. “I love giving my time to this important organization through event planning and coordination with the local schools. Their mission to support the arts across Port Washington is near and dear to my heart (no pun intended), and I look forward to celebrating with the community.”

Tickets are $90 and sponsorships are available to local organizations or individuals at varying levels. For more information, visit www.heartspw.org/red-party-2019.html.