Thanks to an outpouring of love and support in memory of Port Washington’s Gina Farasciano, HEARTS PW recently announced that it has surpassed its initial fundraising goal for the new Gina Farasciano Community Theater Grant. This new grant will award $1,000 annually to a community theater or arts program in Port Washington. Thanks to more than 75 donors—including friends and family in Port Washington and as far away as England—HEARTS has raised enough money to run the program for at least the next 10 years, enabling the organization to bring bright smiles to countless faces, just as Farasciano did for so many.

“We’re overwhelmed by the incredible support to this new initiative, which allows us to both honor and celebrate Gina’s great legacy in Port Washington but also to support theater for the next decade and beyond Eric Gewirtz, President of HEARTS PW, said. “We’re all looking forward to creating and enjoying theater again, and we know that Gina’s creative spirit will live on thanks to the generosity of so many from near and far.”
Farasciano grew up in Port Washington and graduated from Schreiber High School. She spent her youth performing with the Port Summer Show, which became part of the foundation of what would become a lifelong love of theater. She brought her signature warm-hearted enthusiasm to the Port Washington Play Troupe, Community Synagogue Theater Company, Herricks Players, Landmark Radio Theater, countless karaoke stages and more. She also volunteered, helping out backstage at the Daytime/Prime Time Emmy Awards and donating hundreds of hours to the Gold Coast International Film Festival.

HEARTS continues to raise money for this memorial fund to support community theater and arts programs, while also raising funds to support additional arts programs and experiences in our schools and community. Learn more about HEARTS and make a donation at www.heartspw.org. 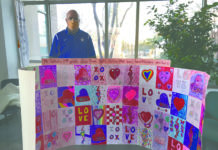 Making A Difference One Slice At A Time