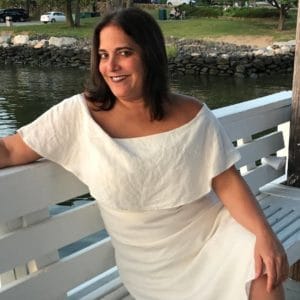 HEARTS of Port Washington proudly announces the first recipients of the Gina Farasciano Community Theater Grant, an annual award to a community theater or arts program in Port Washington. In honor of Farasciano, who passed away in spring 2020, HEARTS has selected to award the inaugural grants to two recipients—The Community Synagogue Theater Company and the Port Summer Show—instead of one, recognizing two Port Washington experiences that she was involved in. Both will receive a grant of $1,000 to be used towards their upcoming performances scheduled for this summer.

“It is our great pleasure to announce the inaugural awardees of the Gina Farasciano Community Theater Grant,” Eric M. Gewirtz, President of HEARTS PW, said. “Gina loved performing, and we as an organization immediately recognized how significant it would be to support these two presentations, annual experiences that she loved and that are bound to bring such joy to the community as we emerge as a community from the COVID pandemic. We are so proud to honor her legacy and passion for the arts and for theater, and to continue recognizing and celebrating her spirit through these theater experiences.”

The establishment of the grant, first announced in Spring 2020 following Farasciano’s passing, was met with overwhelming public support and surpassed its initial fundraising goal. A Port Washington native and Schreiber High School graduate, Farasciano had a lifelong love of theater. She performed in her youth in the annual Port Summer Show, and brought her signature warm-hearted enthusiasm to the Port Washington Play Troupe, Community Synagogue Theater Company, Herricks Players, Landmark Radio Theater, countless karaoke stages and more. She also volunteered, helping out backstage at the Daytime/Prime Time Emmy Awards and donating hundreds of hours to the Gold Coast International Film Festival.

“Gina’s love of theater was well known among her family and her peers,” Donna and Mike Farasciano, Gina’s parents said. “The Port Summer Show and The Community Synagogue Theater Company were special places she loved auditioning for. It never mattered to Gina if she had a starring role or was cast in the ensemble or even if she worked backstage. She simply enjoyed being a part of the whole experience. The stage was where Gina felt alive—the happiest—it did not matter if an audience was large or small! Performing since elementary school thru college and beyond….nothing in Gina’s life filled her heart and soul like getting involved in theater. The added benefit was meeting people who became lifelong friends. Thank you to all who loved “our girl” and donated so generously keeping Gina’s memory and legacy alive thru the arts. She would feel so very honored.”

“Gina lived for theater,” Frank Ullman, a long-time friend of Gina’s, said. “We performed together in Port Summer Show more than 30 years ago while in high school and, in recent decades, we attended more than 100 musical concerts and theatrical events together, with a special focus on local productions. Gina would attend any type of live performance. I followed her lead. Learning about theater from Gina, and attending theater with Gina, has enriched my life.”

HEARTS continues to raise money for this memorial fund to support community theater and arts programs, while also raising funds to support additional arts programs and experiences in our schools and community. Learn more about HEARTS and make a donation at heartspw.org.