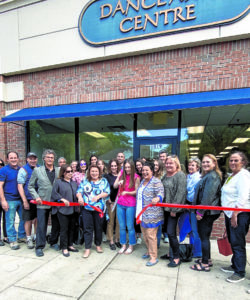 “Ever since then I just stuck with it and I continued dancing,” Farley said. “I danced from three years old all the way through high school at Dance Arts Centre.” Following high school, Farley attended Adelphi University where she graduated with a BFA in dance. While attending Adelphi, Farley worked weekends at the Dance Arts Centre. After working there for nine years, the previous owner decided it was time to pass the torch.

“We call ourselves the DAC family and that’s truly what it is,” Farley said. “These kids and these parents are just so wonderful and supportive and everybody comes in with this great, happy vibe and it’s just been such a lovely experience transitioning into this boss role.”
Farley stated that she uses dance as a way to express herself and credits the instructors at the Dance Arts Centre that helped give her the confidence she needed. She hopes to be able to pass on some of their wisdom and encouragement to her students.

“It’s such a beautiful thing to me because you can express yourself without having to say anything,” Farley said about dancing. “It is that kind of escape where anything that’s going on in your life, you can just not think about it and you have this community around you that supports you and really builds you up. My teachers here were so incredibly encouraging. They made me feel like I could accomplish anything and it created this safe space for me. It’s something I wanted to continue through life. I wanted to be able to have other children have that kind of experience that I had growing up.”

Dance Arts Centre first opened in 1972. The studio will be celebrating their 50th year of business this year. Dance Arts Centre offers a number of different styles of dance, including hip hop, jazz, lyrical, ballet, contemporary and combination classes for children ages two through 18. For more passionate, higher-skilled dancers, the studio also offers a Dance Company, which is available for those who would like to take dancing to the next level.
Farley says her main goal is just to have the business continue to grow. She also hopes to be able to have the students perform at various events throughout Port Washington in the near future once it is safe to do so.

“It’s such an incredible milestone,” Farley said. “I’m so lucky to have been a member of the DAC Family and look forward to instilling a love of dance for our students while also giving them a safe space to learn, grow and express themselves.”