The Schreiber High School Girls Varsity swim team did not stall and picked up right where it left off last season. Carrying 37 girls, this was the largest team Schreiber ever had and saw every athlete make progress. Some improved on existing events and others broadened themselves and tried new events.

We are a team others are taking notice of, both in town and out, for our growing success, for our senior leadership, and for the youth coming into the program. That is directly attributed to our seniors and captains, who helped grow and now lead this team with pride and dedication. The team was led by senior/captains Kimberly Byrne, Isabelle Fagen, Sarah Maley, and Catherine Tasnady.

We won many meets by large margins. Port Washington took home the Conference 2 title, the fifth in team history, and the third consecutive title. The team has improved from a county ranking of 24 three years ago to finishing twelfth this season to looking ahead to a top 10 rank going into next season.

As we moved toward the championship portion of our season, we competed in the Division A Championship, and the team finished in third place. Next, the team faced new and much faster county qualifying times. Port Washington had nine girls compete individually in the Section 8 Team Championship, including three relays qualifying for the finals.

We also had several records fall: Senior and captain, Catherine Tasnady broke the school record for the one-meter dive (six-dives); Ashley Ye and then Annebelle Corcoran broke the school record in the 50-yard freestyle; Annabelle Corcoran also set the record for the 100-yard backstroke; the 200 Freestyle Relay was reset five times this season by Ashley Ye, Isabelle Fagen, Catherine Tasnady, and Annebelle Corcoran. After successfully capturing conference titles in Conference 4, 3, and 2, the team looks forward to next season and a Conference 1 ranking of seventh in Nassau County. 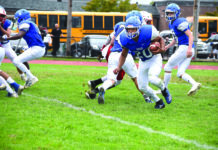 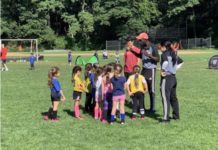 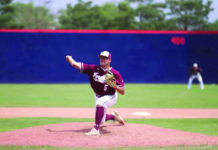