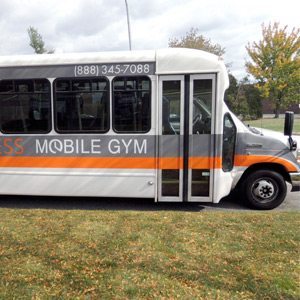 Truth be told, a gym is only as good as the workout inside it. Now, imagine a workout where the gym comes to you…pulls right into your driveway, you walk out your front door only to go through the door of a 27-foot mobile bus that’s been converted into a fitness center on wheels.

Founder of Inform Fitness Adam Zickerman got the idea for the mobile gym after seeing a need to satisfy his Manhattan clients who were fleeing to the Hamptons for the summer. The biochemistry major began his fitness business 16 years ago and carried it from New York City all the way to Port Washington where he resides.

Zickerman has three other Inform Fitness gyms: New Jersey, Virginia and Los Angeles. The mobile gym is an added feature that he offers to Port Washington clients.

The converted bus, a prototype of airport shuttle vehicles, has double-platform floors that can handle the weight of the equipment inside. Port resident David Kerpen has spent about 25 minutes in the mobil gym—which is stationary while he works out—once a week for the past four months. He loves that it’s fast and he’s in and out. He plays tennis once a week for cardiovascular exercise and said he’s in the “shape of his life” since joining Inform Fitness and also having made changes in his diet.

Kerpen told Port News that he was never before able to go to a gym, until the gym came to him. “Everything in this workout is built into the bus and it just shows up at my house,” said Kerpen. “It’s easy to make excuses not to get to the gym, but when there’s a giant bus parked outside your house knocking on your door to exercise, then you go.”

The philosophy behind Inform Fitness is 10 seconds up, and 10 seconds down as Zickerman describes it in his book “The Power of 10” which goes into detail about his once-a-week, slow-motion fitness program.

Inform Fitness is located at 26 Harbor Park Drive, just off West Shore Road. “Relative to other exercises, my technique leaves very little room for injury,” said Zickerman, who encourages his clients to stay active the rest of the week, but do nothing intense.

Another Inform Fitness client, Matt Blank, who lives and works in Port, thinks the time factor of 30 minutes is certainly a bonus in today’s busy world, but it’s not the main attraction.

“For me, it’s common sense that inducing muscle failure quickly is the best way to build muscle,” Blank said. He used to use a lot of momentum and not such heavy weights before he began training at Inform. He never really saw results.

“This is the most effective way to build strength,” he added. “I’ve noticed incredible strength in my legs too thanks to my trainer Vanessa.”

“The goal is to push the weights until you start feeling as if you’re going to collapse,” said Zickerman. “And it’s not about force, it’s about taking it slow and easy.”

From the magic words of his “Power of 10 book” Zickerman says with a little time and experience, the form becomes natural and a zen-like focus will come.