Gus Nuzzolese of Port Washington was chosen as the first W.D. Boyce Award recipient by the Theodore Roosevelt Council. Nuzzolese is senior executive director with Colliers International and received his honor at the inaugural W.D. Boyce cocktail reception and fundraiser at the Port Washington Yacht Club. The reception benefited the council’s “Scoutreach Program,” which is dedicated to meeting the developmental needs of youth in many Nassau County neighborhoods considered at-risk. W.D. Boyce award is named after the businessman whose foresight and determination brought the Boy Scouts to America and is given to a hardworking citizen and businessman who is “living a Scout-like life.” 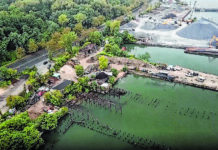 What’s Next For West Shore Road?