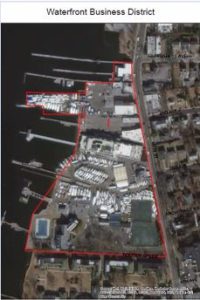 The BW district building moratorium, which has been in affect since 2017, does not permit construction on commercial private properties extending from Sunset Park to Manhasset Bay Yacht Club and the area south of Town Dock. The moratorium has been in place for three years, and has been extended six times. Although the moratorium was initially supposed to end on Sept. 14, it was ultimately extended to allow for the town board to make more amendments to the existing code.

According to the new proposed zoning code, the Waterfront Business district was “established to promote, enhance and encourage water dependent uses, promote environmental sustainability, hazard mitigation and resiliency and increase opportunities for public access along the towns commercial waterfront.”

The proposed BW-zone code changes would permit any of the following businesses in the area, including flower shops, gyms, health clubs and dance studios. A retail grocery or food use, a delicatessen or any other type of store must have a gross floor area of less than 2,000 square feet. Building height must be a maximum of 35 feet, which will still allow three-story buildings. Although now, under the new code the area of the third floor will be reduced by 50 percent of the second floor, to “help preserve waterfront views.”

Under the special uses category, the proposed design must be in harmony with the general architectural character of the surround neighborhood. Other changes to the proposed code include amendments to the parking requirements. The new code allows for an increase from one parking stall per dwelling unit to two parking stalls.

For all new construction, alterations and landscaping changes, the lot coverage was reduced by 10 percent. Under the proposed code, no more than 60 percent of the lot can be covered by any type of impervious material or other type of paving.

Minor structural or architectural elements may extend a maximum of 10 feet above the allowable roof height, provided they comprise with no more than 10 percent of the total roof area be set back a maximum of ten feet from the front of the building wall and five-feet from all other building walls.

A front yard of at least 10-feet is required for all buildings exceeding one story or 20-feet in height. For side yards, no building or structure shall be constructed with less than two side yards, each having a minimum width of 15-feet between the respective side of the building and the side property line of the lot. No building wall shall be less than 30’ from any dwelling unit on an adjoining property.

Amendments were also made to the rear yard set backs, now requiring at least 25 feet where the rear year of the lot abuts a waterway. For lots abutting a land parcel, there is a minimum of 20 feet.

For the site plan review category, the new code includes that all perspective drawings and photo simulations must accurately depict adjoining properties, buildings and the contextual relationship to the surrounding neighborhood.

During the meeting, councilwoman Dalimonte and Town of North Hempstead Planning Commissioner Michael Levine took questions from the community members regarding the proposed changes. Several residents voiced their concerns regarding public access to the waterway.

“There is no going back once these things are built,” one resident said. “I think a lot of people had great reservations about [the Knickerbocker]. As we go down past that building every day, there is a driveway on the left side of that building facing it. It does not look like a public access waterway. Currently what we walk up is a driveway, that has no sign even indicting you can even walk up the driveway. We walk up to a path that takes you to a fence that looks over the bay, and while thats beautiful, you make a right and you hit another fence. There’s no bench, there’s nothing to sit on. It’s not access. I just want to make the comment—what does public access really mean, and that we learn from our mistakes.”

“What we’ve said during our meetings is that the Knickerbocker literally meets the letter of the law, while not at all meeting the spirit,” Levine said. “It’s functionally useless in terms of usable open space. That is one of the main reasons that this revision is going to require 15 foot side yards.”

Residents are welcome to reach out to councilwoman Dalimonte’s office with questions regarding the proposed changes to the zoning code. The Town of North Hempstead will be voting on these proposed changes at their next meeting, which will take place virtually on Oct. 22 at 7 p.m.