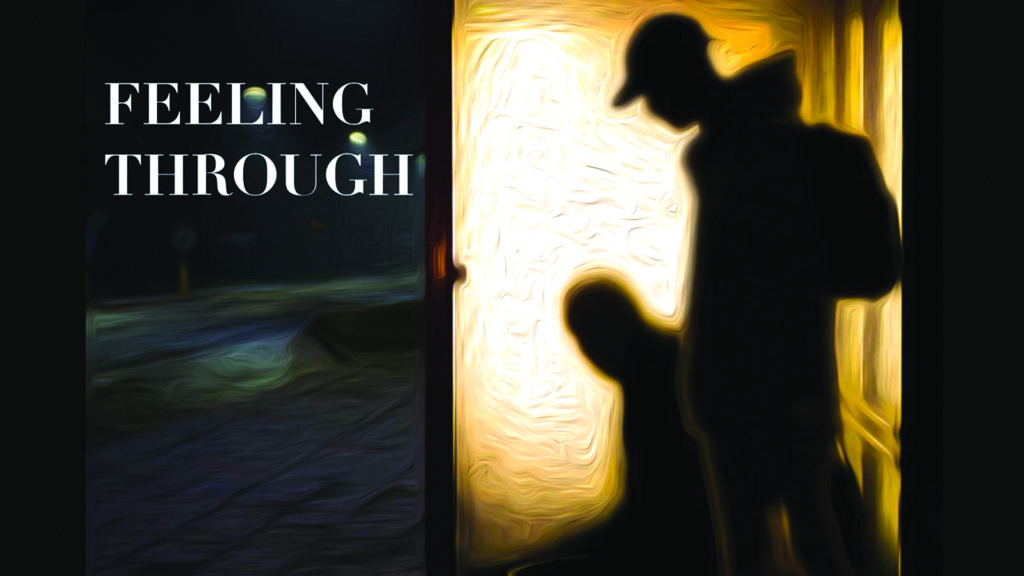 Inspired by his first encounter with a deaf-blind man seven years ago, filmmaker Doug Roland created Feeling Through, a film about an unlikely connection between a teen without a home and a deaf-blind man, which was made in association with the Helen Keller National Center to cast the first deaf-blind actor in a lead role.

Seven years ago Roland was leaving a friends home in the East Village at 4 a.m. and saw a man on a deserted street corner holding a sign stating that he was deaf and blind and needed help crossing the street. Roland mistakenly tried to speak to him, but realized it wouldn’t work, so the two communicated through pen and paper. Roland helped the man get to his bus stop, but they missed the bus, so the two sat and had a conversation through pen, paper, and later the palm of the man’s hand until the next bus came an hour later.

“He was a very genuine and charismatic person,” said Roland. “We made a connection and that experience has resonated with me since then. First and foremost, when I work on a project, it has to really resonate in a core place and that experience stuck with me for seven years, so I wanted to turn it into something.”

And seven years later, Roland created a film inspired by that one night. After writing the film, Roland knew he needed to connect with the deaf-blind community, so he googled organizations and soon found himself on a call with Helen Keller National Center (HKNC) executive director Sue Ruzenski.

“I was very excited, but I’m always a bit skeptical,” said Ruzenski. “But, once I met Doug, I recognized his insight and passion for the project.”

Filmmaker Roland and the HKNC entered into a partnership on the project, giving Roland a core understanding of the deaf-blind community and assisting him on casting a deaf-blind actor.

“It’s been very exciting because it’s something so new and so out of the everyday of what we do here,” said Ruzenski. “And we see this as an opportunity to reach people and raise awareness for the deaf-blind community. This film is a way to educate people that’s more about connecting with who they are as people.”

With the help of those at HKNC, Roland began holding auditions to cast the first deaf-blind actor in a lead role. The process required multiple auditions and interviews with the help of interpreters. While conducting the initial round of auditions, Roland became aware of Robert Tarango, who wasn’t scheduled to audition, but was soon brought in anyway.

“It was one of those cheesy things where we just knew,” said Roland. “Before he even started doing anything, I knew. He’s a really warm and genuine guy. His personality was apparent when he walked in the room.”

While the film will include a deaf-blind actor in its cast, it is not a story of deaf-blindness. The story follows the protagonist, a teen in a challenging situation, which puts him out on the streets at night where the teen meets a deaf-blind man and the two form a connection.

“It’s a story about human connection,” said Roland. “It’s about the transformative power of human connection and how it empowers the teen to deal with other challenges in his life.”

“Most people, when thinking of someone who is deaf-blind, the only person they know is Helen Keller,” said Ruzenski. “We want to expand people’s understanding. More and more people who are deaf-blind are achieving such incredible success in life and are not as well known. The film and documentary are ways to bring attention to the fact that anything is possible for people who are deaf-blind.”

The film was funded through a crowdfunding website called Seed and Spark. Through the website, the film hit 80 percent of its goal, which was enough to get the project started. Feeling Through is still accepting donations through the HKNC website, www.HKNC.org by clicking the donate button and indicating that the donation is for the film or through mail to 141 Middle Neck Rd., Port Washington.