You might say the story began 20,000 years ago. Bayview Colony wasn’t always Bayview Colony, you know. It was once nothing more than a humongous hill of sand that ran down to Manhasset Bay. A couple of enterprising gents turned it into one of Port’s earliest sand mining operations (circa 1850). Their surnames should be familiar to locals: Murray and Reid—each has an avenue bearing his name. (We once lived on Murray Avenue, which was just up the block from the old Louie’s. Who could ask for anything more?)

By 1920, the sand mining had moved, to what was often affectionately—and not so affectionately—referred to locally as “the pits.” (Not to be taken lightly, however, are those whose muscle and sweat mined the sand. Theirs was not a frolic in the sun.)

The departure left the site with only two buildings: a boat shed and the hangar of a Curtiss Aeroplane Company subsidiary. But not for long.

Enter Carl Fisher, a zillionaire visionary, developer, and entrepreneur (Miami Beach, Montauk, Indy Speedway, etc.), who was as self-destructive as Harry Gordon Selfridge. So, you ask, what’s that have to do with Port Washington?

Answer: Fisher also developed Bayview Colony and literally brought the brothers Purdy—Ned and Gil— to the site of the Curtiss hanger, which became the Purdy Boat Company (founded by Ned, 1914).

In the 1920s and 30s, Purdy’s classic custom–designed and built yachts and racing boats were the toast of the rich and famous. Just as famous were their guests: Fred Astaire, Sir Laurence Olivier, Henry Ford, Joan Crawford, and Nelson Rockefeller. Childhood movie star of the 1930s, Shirley Temple, had a birthday party aboard the prize of the Purdys, Aphrodite, owned by Manhasset resident, the late John “Jock” Hay Whitney, whose exceptional life has touched millions.

Before you begin to think that I’ve lost my head in a history book, you should know if it weren’t for all the above, the hero of this tale would not be. Best I connect the dots. Alan’s mother was a Purdy. Her father was Ned Purdy, which makes Alan Dinn, Ned Purdy’s grandson. And Port Washington has been the beneficiary of not only the Purdy Boat Company’s presence, but also the presence of Purdy’s grandson, Alan Dinn. He’s quite a guy. Read on.

Alan grew up here and graduated from Schreiber, Class of 1960, earned a BS in aeronautical engineering from Rensselaer Polytechnic Institute, where he joined Air Force ROTC. Upon graduation, Alan became a Second Lieutenant/Maintenance Officer, stationed at Fort McClellan Air Force Base for two-and-a-half years. Thanks to the French withdrawal from the bloody no-win war in Vietnam, Alan had the dubious pleasure of a no-frills flight to the Nha Frang Air Base in South Vietnam, bordered on the east by the China Sea. A year later, when he returned to the mother country, Alan was a Captain and honorably discharged.

Back in Port, he went to work for Grumman Aircraft, renowned for the Navy’s F-14 Tomcat and the LEM. Next, Alan, the engineer, married Susannah, the nurse, exactly three months after their first date (2/23/70 – 5/23/70). Susannah (now Sue) and Alan have two grandsons, courtesy of son, James, and his wife, Wendy.

These days, one-time engineer Alan Dinn is also a published writer/historian (Purdy Boats, St. Stephen’s Episcopal Church), genealogy buff, and Lay Eucharistic Minister. He does well at each. But that still doesn’t tell you how he came by the house built in 1906, does it? The answer: Alan’s paternal grandfather, James E. Dinn, Sr., bought it from its builder in 1911 or 1912; James E. Dinn, Jr. inherited the house from his father and bequeathed it to his son, Alan.

If you didn’t know before meeting Alan that he was an engineer, one look at his workspace would tell you—precisely organized and uncluttered. I wouldn’t dare let him see the inside of my office. Matter of fact, I wouldn’t want you to see it, either. 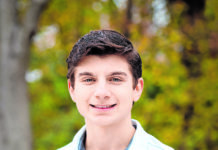