The life of a local Port Washington Celebrity 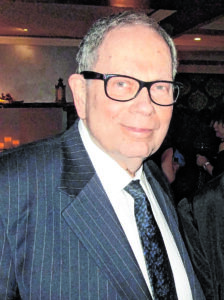 On Sunday, July 31, Dr. Irwin L. Kellner passed away peacefully in his home from Parkinsons’ Disease. At the age of 83, Irwin lived a long, successful and happy life. He is survived by his wife Ann Kellner, daughter Lori, daughter Shari and son-in-law Jeff and their three kids, Sam, Marli and Olivia.

Irwin is considered a local celebrity in the finance world and Port Washington. He was a helpful community member, a friend to everyone and an inspiration to many. As the former chief economist for Chase Manhattan Corp. and weekly columnist for MarketWatch, Irwin’s experience and success in business economics is immense.

Irwin was born and raised in Brooklyn. He attended Brooklyn College for his bachelor’s and master’s degrees. Then, Irwin attended the New School for social research for his PhD. He and his family moved out to Port Washington in 1971, and he finished his PhD after the move in 1973.

Aside from Irwin’s passion for economics and business, he enjoyed golf, professional wrestling and his family.

“He was a big family man,” said eldest daughter Lori. “He never missed any of me and my sisters’ events at school. He was totally nuts about his grandkids. He also never missed their events. He came to everything he was invited to, like basketball games and orchestra concerts.”

Despite being busy with work, Lori noted that her father always made time for his family. While dating his wife Ann, he often spent time with her father to watch professional wrestling matches and took him to Madison Square Garden to see the matches live. Irwin spent a lot of time with his son-in-law Jeff. Jeff and Irwin’s second daughter Shari met when they were 17 years old. Irwin was great friends with his son-in-law. They played golf and talked stocks together.

When Lori and Shari were children, Irwin would drive them to school once in a while. Lori recounted when he would get to drive the “Anycar,” which was made for Manufacturers Hanover Trust, a New York City-based bank that Irwin worked for at the time.

“The ‘Anycar’ was a car that had all different pieces of different cars made into one,” said Lori. “He would drive us to school in the car sometimes, and while I was mortified because of the attention. Shari showed her friends, everyone thought it was very cool.”

Before Irwin found a love for business and economics, he loved cars and drawing cars. In high school, he wanted to be a car designer.

“The last couple days before [my father] passed, we were talking about cars and reminiscing on his first car which was a 1958 Pink Oldsmobile,” Lori shared.
When art school didn’t work out, he got interested in economics while going through college. Irwin wrote about economics a lot for Business Week, and the man he wrote a lot about asked him to work for him at the bank.

While writing about business and economics, Irwin realized how much he loved speaking. He wrote great speeches and was often quoted in newspapers, spoke on radio shows, and appeared on CNN, CNBC and many other networks. Irwin spoke at an event hosted by the Port Washington Friends of the Library group.

“He always had these great one-liners and made his speeches easy to understand,” said Lori. “He would say silly things like ‘As Henry the Eighth said to his fourth wife, I won’t keep you long.’ Or share funny anecdotes.”

During his career, he often did side work writing newsletters and speeches. After retiring, he wrote for MarketWatch and appeared weekly on News 12 to speak.
Irwin’s involvement in economics and business made him well known on Long Island, Port Washington, and the finance world. In Port Washington specifically, Lori can recall sitting in the local diner and having men come up to speak with him about stocks and the speeches they’ve seen from him.
“He loved Port Washington,” said Lori. “One of [my father’s] odd jobs in college was working on a laundry truck that delivered linens to restaurants in the area. He would drive around and see the town and just loved it.”

Irwin was a member of the Village of Port Washington North Planning Board and was very generous with his time when it came to other people. He would help anyone who asked, whether it was to help raise money or bring awareness to a situation.

“Back a long time ago, people wanted a stoplight on a busy road in Port Washington,” said Lori. “He called the Town of North Hempstead to speak with the council and made it happen.”

“He was always taking on these things to help others or give advice,” said Lori. “He introduced people to other people, so his connections were also your connections.”

In June of this year, Irwin was presented with a proclamation for 50 years of service by the village of Port Washington North for his dedication to the town.
Irwin’s devotion to his family, successful career and town spirit are inspiring.