The Port Washington Union Free School District Board of Education issued a Request For Proposal (RFP) to hire a recruitment firm that will identify exceptional candidates for the district’s superintendent of schools position.

Initiation of the search effort is a result of Dr. Kathleen Mooney’s recent announcement that she will be retiring at the end of the current school year. The board of education will be accepting proposals from search firms through Friday, Jan. 4, 2019. The board intends to make a final selection and engage a search firm by mid-January to begin the recruitment process. The board’s goal is have the selection of the new superintendent finalized by mid to late spring, with an official start date of July 1, 2019. This timeline will provide for a smooth transition between Mooney and the new superintendent.

“Dr. Mooney’s leadership and guidance has helped create an extraordinary academic atmosphere throughout the Port Washington School District, building the foundation for a successful and prosperous future,” said Karen Sloan, Board of Education President. “The Port Washington School District has a tradition of excellence, and is one of the highest performing school districts in the region, thanks in large measure to Dr. Mooney and her ability to bring out the best in the district’s talented staff. She has also been an active supporter of our HSA groups, educational foundation and other community groups that play such an important role in the district’s achievements. As the board of education conducts its search, we will work to find candidates that have the experience and skill set to build on the successes of Dr. Mooney’s tenure as well as provide new vision and direction that will help ensure our students continue to receive the resources they need to excel both in the classroom and beyond.”

Dr. Mooney was appointed superintendent of Port Washington Public Schools in 2012 after serving in the district since 2000. Prior to the superintendent position, Dr. Mooney served as the district’s human resources administrator as well as director of personnel services.

Mayor Herrington Appoints Mary Jo Collins to Board of Trustees 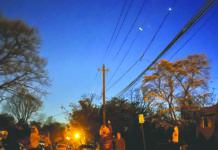