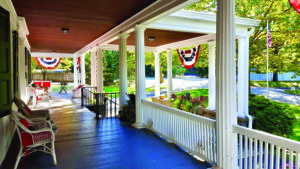 The Sands-Willets House, a historical museum located in Port Washington will be receiving a much needed restoration in the coming months. The Cow Neck Peninsula Historical Society was awarded a $125,525 grant from the Robert David Lion Gardiner Foundation for the restoration of Sands-Willets Home’s front porch.

“Our plan was initially to built a handicapped access ramp for not only wheelchairs and walkers but for moms and dads pushing strollers,” Chris Bain, president of the Historical Society, said.

But after hiring an architect, they learned that the end of the porch is nearly collapsing and needs to be stabilized before any additional work can be done to it. This is the first time the nearly 100 year old wrap-around porch has had any major repairs done to it. The plan is to restore the porch in the same architectural manner as it currently stands, with an added ramp to allow for those with strollers and wheelchairs to easily enter inside. The restoration process will take approximately nine months to complete and is set to begin this month.

“This long overdue project, made possible by the support of The Robert David Lion Gardiner Foundation, will enable everyone in the surrounding communities and beyond to freely visit our historic house and, once there, get a deeper understanding of our fascinating local history,” Bain said in a press release. Project Manager and Past President Fred Blumlein also noted that the project is being launched on the 30th anniversary of the Americans with Disabilities Act. 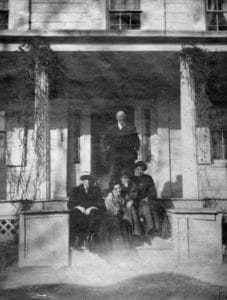 The Sands-Willets House, whose western side was built in 1735 by John Sands III, had a front porch added in the 1850s when its new owner, Edmund Willets, enlarged the home in Greek-Revival style. That porch was replaced in approximately 1910 with the striking 65’ long front porch with porte-cochere that is currently seen on the property today.

The lengthy restoration process involves removing the 10 columns which hold up the roof and replacing them with temporary columns. The existing columns, which are rotting out, will be sent out to a carpenter for repair. After the wood-work is complete, the columns will be sent off to a painter. The existing paint will be removed off-site in a lead-free environment and then primed and painted before they are returned to the home.

“The columns will be gone for three or four months,” Bain said. “In that time they will be working on the decking—it’s a huge project. It’s going to keep the Sands-Willets House closed for another year, regardless of the pandemic.”

Bain stated that the Sands-Willets House has had repairs previously, such as a new roof and fresh coats of paint throughout the years but this restoration is the last major structural change that the house should need for the next 10 to 20 years.

The Cow Neck Peninsula Historical Society is a nonprofit organization aimed at “engaging people of all ages in programs that highlight the lifestyles of the people and families that lived and worked on the peninsula throughout the years. Central to this mission is the preservation of the Sands Willets House (circa 1735) and the Thomas Dodge Homestead (circa 1721), which the Society operates as house-museums, serving as resources for the community.”

Sands-Willets House is listed on the State and National Registers of Historic Places and is featured as a historical site on the New York State Revolutionary War Heritage Trail. In years past, the site has held many events from historic house tours, exhibitions, lectures, as well as other activities. The Historical Society had events scheduled in 2020 but COVID ultimately shuttered those plans. This year, Bain stated that the house will be closed while the restoration takes place. The Historical Society is now planning future exhibitions for 2022 and hopes that the restoration of the porch and the added handicap ramp will allow people to visit the historical museum for generations to come.

“When we have a big event, whether it’s a costume exhibition or a quilt exhibition, it’s amazing how many people come in and say that they’ve been driving by the house their entire life they’ve never been inside before,” Bain said. “We’ve got a much stronger presence now in the community in part because of Facebook and the availability of social media and email blasts that we can send out with the click of a button. There is a lot of history in town everywhere you look.”

The restoration is set to begin this month. The Historical Society will be documenting each step of the progress on their website, www.cowneck.org.