“We really have been blessed with a lot of Port Washington residents and groups who have really stepped up to the plate,” said Cornell University Cooperative Extension of Nassau County Master Gardener Patricia Valente, who approached Manorhaven Mayor Jim Avena about the project. “I’m a master gardener and I was in the Class of 2016 and this is actually an intern project that came to fruition not without a lot of blood, sweat and tears. I’m sure it’s going to be beautiful and I’ll be here on a weekly basis to check things out and water the plants.”

The planting event that took place on July 20 was the first phase of Valente’s project in which she hopes to expand throughout the preserve. After pulling into the Manorhaven Preserve parking lot, one can see that volunteers carefully cleared out the overgrown non-native plants that had been growing adjacent to the fence backing the Senior Citizens Center. The lot was mowed over by Anthony Marinello of Dropseed Native Landscapes and then volunteers laid cardboard down to protect the area from weeds. Mulch was donated by Frank Hefferin Tree Service and spread out by the volunteers before they began planting. 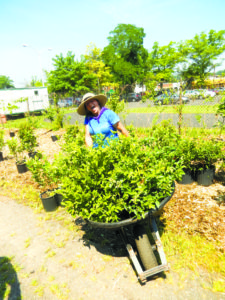 “The importance is that we’re bringing back native speciesto Port Washington,” said Residents For A More Beautiful Port Washington Executive Director Mindy Germain. “What I also love about this project is that it’s linking this preserve with the rest of Port Washington. I feel like this project is a great start to create linkage between the different parts of Port Washington and this preserve was kind of like nothing and now it’s becoming something. I think everyone here will always come back to this and look forward to watching it grow and look forward to doing the other side. I’m really impressed with the vision that the village has for this whole area by planting these two native gardens and then linking it with, there’s a plan for a community garden, so I think this is going to become a real center of our town.” 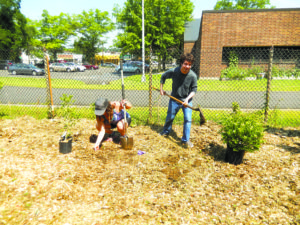 Nelson, Pope & Voorhis, LLC, Landscape Ecologist Rusty Schmidt educated volunteers on how to best dig their holes for planting, how to separate the plant’s roots and arranged the plants in rows for the volunteers. Volunteers, including members of A More Beautiful Port Washington, Assemblyman Anthony D’Urso, Manorhaven Board members and Port Washington residents grabbed shovels, ran to a plant and began digging their holes to beautify the preserve. 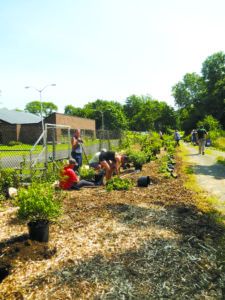 “This is a demonstration,” said Cornell University Cooperative Extension of Nassau County Master Gardener Francine Frede. “It’s an educational feature that the town now has and we’re going to try to get some signs made so that people can understand the plantings.”

In addition to informational signage, Valente and Frede expect to soon complete the second phase of the project which includes clearing out overgrown and non-native plants on the opposite side of phase one. Residents For A More Beautiful Port Washington hope to create a community garden on the preserve to further the importance of gardening and eating fresh produce.

“If there’s one thing this entire area is for other than just pure beautification and that idea of water control, it’s to begin to let people see that they can do natives in their backyard and they should also begin getting out there and asking their landscaper or local gardening store to see their selections of New York natives,” said Valente. 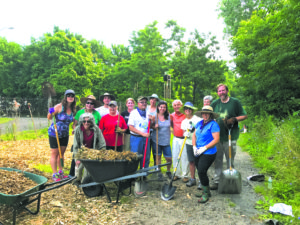 The clean up and planting on Manorhaven Preserve was made possible by a grant from the Peter and Jeri Dejana Family Foundation, which was used to purchase the 300 native plants planted on the preserve. In the Port Washington style of the community coming together, the native garden in the Manorhaven Preserve was a true cooperative project between Port Washington organizations and residents.