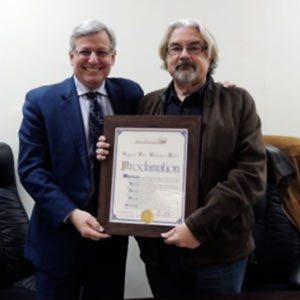 Deputy Mayor and Trustee Michael Schenkler of the Village of Port Washington North has announced that he has decided to retire from his positions. Schenkler has served the village as a trustee since February 2004.

Mayor Weitzner appointed Trustee Steven Cohen to the position of deputy mayor to take the place of Schenkler. Soundview resident Matthew Kepke, an attorney who has served as communications commissioner for the village for the past year, was named to fill the remainder of Schenkler’s trustee term, which expires in March 2015.

During a ceremony celebrating Schenkler’s service, Mayor Weitzner presented a proclamation declaring Jan. 9, the day he publicly announced his resignation, to be Michael Schenkler Day in the Village of Port Washington North. He said he would miss Schenkler’s friendship and wise counsel.

In reading a letter to the Board of Trustees during the meeting on Jan. 9 Schenkler noted that his service to the community during the last 10 years has been one of the most rewarding experiences of his life, but since his retirement last year he and his wife have been spending more time at their home in East Hampton and expect to settle there full time.

Schenkler was first appointed to the board in February 2004 to fill a vacated seat and was elected in 2005. He was eventually appointed deputy mayor and with the exception of Mayor Weitzner, was the longest serving board member.

Schenkler always demonstrated a sense of humor that enlivened meetings and an attention to detail that could intimidate anyone appearing before the board if they weren’t well prepared.

Kepke has been a resident of the village since 2005. He told the Port News that he welcomes the opportunity to serve the community.