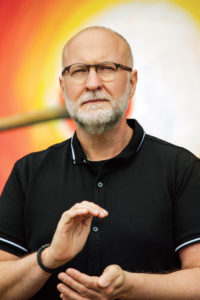 If nothing else, Bob Mould is a musical oxymoron. Fans know him for the heavy, guitar-driven sound that’s become Mould’s trademark dating back to his days fronting punk legends Hüsker Dü all the way through his time in Sugar and as a solo artist. But wrapped within those power chords and driving riffs is a melodic sensibility and emotional honesty that belies the aggressive point of delivery. And while it’s yielded bittersweet and quasi-dark songs in the past, with last year’s Sunshine Rock, Mould made a pointed attempt to try and be more positive on his thirteenth solo album. A recent move to Berlin, where he splits time between his new German home and San Francisco, has helped soften the 59-year-old rocker’s harder edges.

“Beyond the change of environment, which I always think is one of the most important things that goes into making records, well, I made a conscious decision to write as optimistically as I could. The two records prior to Sunshine Rock were both informed by a lot of loss,” he said. “Lord knows, that continues—that’s what we do. It was a little bit of work to stay bright, given everything that is going on in the world.”

Mould kicks things off with the fast-paced title cut that finds him begging his significant other to be spirited away amid crashing hooks, bell-sounding notes and darting strings while “The Final Years” carries a Cure-like vibe to it as Mould ponders his mortality while asking, “Where did I put my sense of misplaced rage?”

While he recorded this batch of songs with assistance of bassist Jason Narducy and drummer Jon Nurster, Mould will be embarking on this string of dates as a solo act, which will make for an interesting experience given that he’ll be plugged in and cranking up the volume.

“My current show will be loud and aggressive. There will be some quiet moments. Bring your knowledge of the records and after maybe 15 or 20 minutes, you’ll be able to imagine all the other parts that are missing, whether it’s bass or drums. It will be a shock at first, then you will get attuned to what’s happening and you’ll be able to hear it more clearly. It’s sort of a blur for a bit. Then I think people sort of lock into what’s happening and then it gets real fun,” he explained.

Inspired by the fusion of loud guitars and pop sensibilities produced by the Ramones and the Buzzcocks led to his eventually forming Hüsker Dü in 1979 with Grant Hart and Greg Norton while Mould was a freshman at Macalester College in Minnesota. While the power trio made its mark as cornerstones of American alternative music in the ‘80s, Mould made a name for himself following the band’s break-up, both as a solo artist and in Sugar. The emotional depth of Mould’s solo work has found him compared to Richard Thompson. Ironically, Mould came to Thompson rather late in life.

“I had no idea about him or his work until I was about two-thirds of the way through [the 1989 album] Workbook. I let a friend of mine in the Twin Cities listen to what I was working on and he asked if I had ever heard of Richard Thompson,” Mould shared. “I said, ‘No, who is that?” He laughed and said I better listen because what you’re doing sounds a lot like his stuff. I listened and thought it was too late to change.”