All of us have had a moment (or day or week) when we kind of feel sorry for ourselves…it could be after one horrible day at work or maybe the kids did something unspeakable—you get the idea. Then, a friend mentions that he just lost his job, or another reveals she is diagnosed with a life-threatening disease, and all of a sudden, your perspective changes. Well, the following story may have the same effect on you. It’s all about blind sailors who turn their challenges into positive energy.

News out of Sheboygan, WI, a hub of sailing in the Midwest, tells the story of how a weekend of fog and lack of wind messed up some races out on Lake Michigan. And while it caused a racing delay, some racers took advantage of postponement and used their time wisely.
There was one category of racers in Sheboygan that don’t care all that much about the fog. In fact, they don’t even care that much about darkness and are ready and raring to go match racing in any visibility conditions. These are blind racers from five nations who gathered in Sheboygan for the Blind Match Racing World Championship. The problem with the regatta wasn’t the racers, but the sighted people who put out the course marks and umpire the racing. So while they were eager to get out and race, they had to wait around until the fog dissipated.

So instead of match racing on Lake Michigan, the sailors gathered at the Sheboygan Yacht Club courtyard. They spent time educating the sighted women sailors into how their match racing works. Blind sailors have the same racecourse as sighted match racers, the same umpires and pretty much the same set of rules as the sighted women sailors. And they are sailing in adapted Sonars. The big difference is they use a number of different sounds to mark their racing course, as well as to describe what tack each boat is sailing on.

The sighted sailor, who thinks it’s enough of a problem to sort out the normal sound signals from the committee boat, may have become just a little bit more confused during the demonstration. The blind sailors are forced to keep all the following signals in mind: two signals from the buoys marking the starting line, one of which is also the bottom mark; a special sound from the weather mark and two different sounds from a tweeting box in each boat, signaling whether the boat is on port or on starboard tack, in order to know who’s supposed to give way.

To distinguish all these signals is hard for any sailor on a shore demonstration, but proves even worse out there on the water. The sighted sailors got an experience as they, with completely black goggles covering their eyes, went out to sail practice races against a blind team led by British skipper Vicki Sheen. “Your world is what you feel underneath you, and with your fingertips. You’re feeling everything through your hands and through your body, since you’ve got such a reduced visual sense,” she said as she explained how she helms her boat.

For sighted skipper Elizabeth Shaw, who hails from Halifax, Nova Scotia, and is the training program director consultant at Oakcliff Sailing, she described her experience racing against the blind team, stating, “We had the two marks beeping, we had the tweeting boxes going off on our boat and on their boat, and then there was a fog horn going off and then there was a bit of noise within our boat and motorboats going around. It got very confusing, very quickly. It’s pretty incredible what those athletes are able to achieve and focus on. Everybody has a job on board, it’s just like what we do, but you take away your sense of sight.”

Dave Perry, five-time winner of U.S. Match Racing, a US Sailing Hall of Famer, and author of many books, including Understanding the Racing Rules of Sailing Through 2016, Dave Perry’s 100 Best Racing Rules Quizzes and Winning in One-Designs, shed some light on what it is like to be a blind sailor. “I was fortunate to have the opportunity to run a North U Match Racing Clinic for the vision impaired sailors preparing for the 2016 World Sailing Blind Match Racing World Championship, being held Sept. 21-25 at the Sheboygan Yacht Club in Sheboygan, Wisconsin. Four teams participated, coming from California, Canada, Great Britain and a team composed of sailors from Massachusetts and Sheboygan. Though each team had a sighted coach, they race with no sighted person on board. Truly amazing. The skipper is required to be 100 percent blind, and the two others can have varying degrees of vision impairment.

“They had some goggles I could wear to experience what their vision ability was like. One common view is like looking through wax paper. You can make out shades and rough shapes, but there is no clarity. The other is like looking down a straw, but the straw is in a different place in each eye. They can see what they see clearly, but it is tiny, and they have no depth perception. Plus, if they lose sight of it, it takes them a while to search around to find it again. “They use two marks to form their starting line, each making a unique sound, and a windward mark with its own sound. They sail the traditional match racing course but use the pin end of the starting line as the leeward mark. Each boat has a noise maker, which makes a different sound on each tack. In addition to the sounds of the marks, they have watches that beep and vibrate, and they are talking with each other as normal, so their world onboard is very loud. This is just one of their challenges. Another one is keeping track of where they are. If they lose track of the marks, they can get quite lost. And of course, they need to be able to maintain the point of sail on which they want to sail. All this while trying to beat the other boat across the finishing line.” 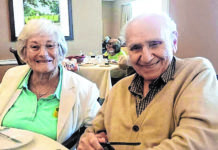 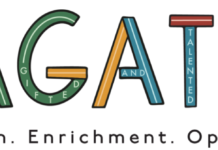 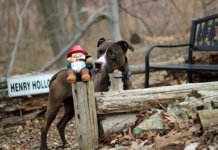