As I sit down to write this column, the weather forecast for the weekend is lower than average temperatures and the possibility of snow. So it makes sense to bring readers a wonderful photo and some news coming out of the recent BVI Spring Regatta. Steve and Heidi Benjamin took their Spookie down to race, as did Bryan Coon, of Hicksville, on Solstice, and Sam Talbot, Spike. Your columnist knows these racers through working with the Yacht Racing Association of Long Island Sound (YRALIS). They are all expert skippers, but Steve Benjamin just shines. Steve is one of our “adopted” sons as he has raced on Manhasset Bay for many years at the Annual Frostbite New Year’s Regatta. In fact, Steve and Heidi deeded two new trophies in 2006 called the Wharf Rat Challenge and the Wharf Rat Challenge/Top Team from Larchmont. The purpose of these trophies was to create more competition, enthusiasm and participation at InterClub dinghy regattas.

Steve won the prestigious 2015 Rolex Yachtsman of the Year Award back in early March. Since winning the Yachtsman of the Year, he has been on a winning streak. He won the 2016 Etchells U.S. National Championship in March. After grabbing a win on the Friday of this three-day event, he and his team came back on Saturday to own the day, winning all three races, giving them podium honors. Their wins of over seven races was so dominant, that the last day of racing was to determine 2nd through 6th place. 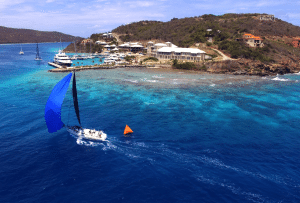 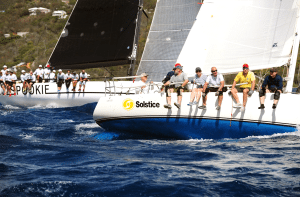 Next up for Benjamin was the BVI Spring Regatta and Sailing Festival. Mother Nature had the temerity to actually rain on the first day of racing in the BVI Spring Regatta…hard to believe, isn’t it? While it may have been a rainy day in the BVIs, it wasn’t enough to take the heat out of the day’s racing. In a breeze of 13-15 knots, 12 classes and three racecourses enjoyed a consistent easterly. No surprise that Steve continued his winning ways. Steve and Heidi skippered their boat, Spookie, a TP52, to a first-place finish. On day two, the Spring Regatta offered up just what the people came for—plenty of sunshine, turquoise water, breeze up to 17 and awesome sailing, with the race taking most classes to the north side of Tortola and around Sandy Cay, a BVI National Park and one of the most spectacular islands in the BVI. Spookie came in first overall.

Said Steve, “We had a wonderful day and our lead is giving us the opportunity to do some maneuver training. We’ve been practicing starts and a crazy windward mark rounding called a Sambuca, to keep the crew training for St. Barts, so this is ideal training for us. It really helps having Peter Holmberg on board—every maneuver is costly so we try to work out the general wind shift patterns…but we don’t always get them right!”

The BVI Sailing Festival Round Tortola Race, which is part of the Spring Regatta, was another spectacular day. Steve and Heidi continued to dominate. Penalized by an over early in the start of the CSA Racing Class was not enough to hold back Spookie from taking first in class. More significantly, however, Spookie broke the Monohull Nanny Cay Challenge record in an elapsed time of 3:08:43, a whopping 21 minutes off the previous record of 03:29:44, set in March 2013 by Peter Corr’s Aiyana, an Alia 82.

“We were really trying to get inside that record for the Nanny Cay Challenge,” Steve said. “Once we got into the lead after our over early start, we beat all the way to the top of the island, fetched the rocks at the top then set a fractional code zero and took off on a screaming reach, which was beautiful, and proceeded to get lifted on starboard as the wind went right, so we set our 4A, our bigger spinnaker. I guess we hit 21 knots, saw gusts to 23 and had a beautiful run down the backside of the Island, making it in one jibe and planing a lot of the time. It was really fantastic.”

Time will tell if Steve and Heidi can keep up their amazing winning streak. But one thing is clear—your columnist wants to come back in the next life as Steve Benjamin, or at least one of his crew.